On June 15, the Coca-Cola Company (KO) announced a letter of intent to refranchise territories in most of the Memphis, Tennessee, market unit to Coca-Cola Bottling Co. Consolidated (COKE). 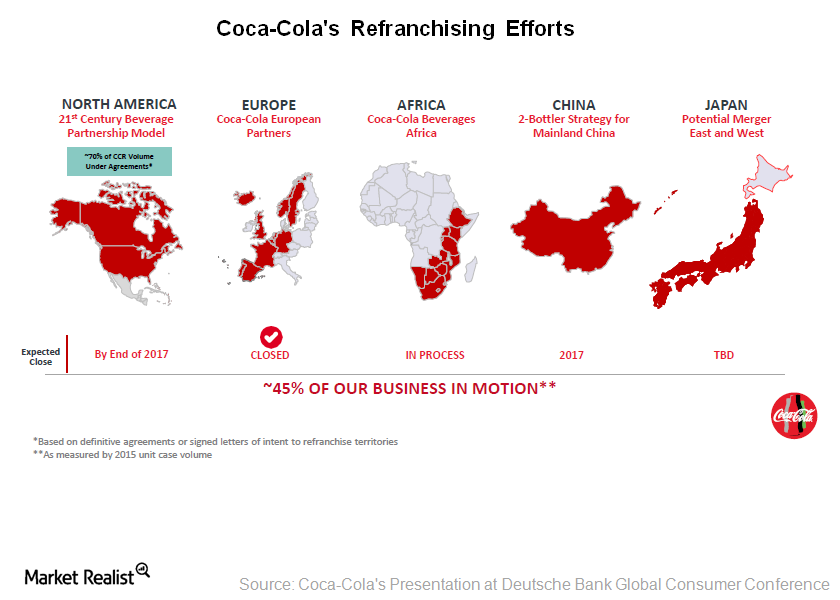 Coca-Cola aims to refranchise all of its North American bottling operations by the end of 2017. According to Coca-Cola’s COO, as of now, the company has agreements that cover 70% of the volume that it intends to refranchise.

Coca-Cola also continues to enhance its bottling network beyond North America. As mentioned in part two of this series, in May 2016, three of the company’s bottlers combined to create Coca-Cola European Partners PLC (CCE), Coca-Cola’s largest independent bottler based on net sales. In Africa, SABMiller, Coca-Cola, and Gutsche Family Investments are coming together to form Coca-Cola Beverages Africa. This transaction is expected to close in the third quarter of 2016.

After the transformation, Coca-Cola will handle just 3% of the global bottling volume, concentrated largely in the ASEAN (The Association of Southeast Asian Nations) countries and in India. This compares to 18% in 2015. Coca-Cola constitutes 8% of the iShares U.S. Consumer Goods ETF (IYK).

Coca-Cola and PepsiCo (PEP) have strong and extensive distribution networks. Dr Pepper Snapple (DPS) relies on these beverage giants for the distribution of some of its brands. As part of a strategic deal, Coca-Cola is now the preferred global distribution partner for Monster Beverage (MNST).

Coca-Cola’s refranchising will involve the transfer of the majority of its workforce to its bottling partners. According to Coca-Cola’s COO, the number of employees is expected to decline from just over 120,000 to just under 40,000. 20,000 of these employees will be in the company’s core business, and the rest will be in bottling investment group territories. This will enhance the company’s productivity in the long term.