Foot Locker derives most of its revenue from US markets. The company operates about 2,300 stores in the United States under several store banners, as we saw in the previous part of the series.

In fiscal 2016, Foot Locker made $5.3 billion in US sales, representing 71.6% of its total revenue. In contrast, international revenue came in at $2.1 billion, accounting for 28.4% of the company’s total revenue. Despite double-digit sales growth in local currency in several key markets, the contribution of international sales to Foot Locker’s revenue declined, largely due to forex factors. 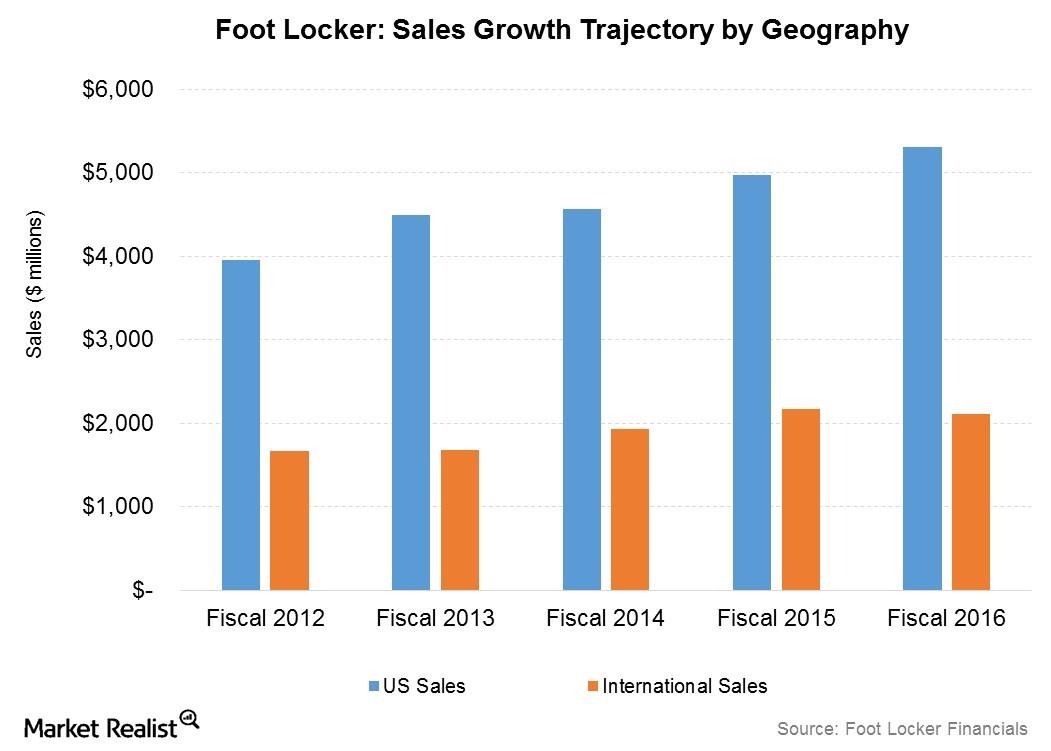 Foot Locker’s sales growth can be partly attributed to the boom in premium sneakers and athletic apparel. This has been spurred by the increase in fitness activities and athletic pursuits around the world. While Foot Locker’s global store count has actually declined over the period, the retailer has posted same-store sales growth for 25 consecutive quarters.

Running remains the largest sporting category for Foot Locker. But the success of Nike’s (NKE) premium basketball products under the Nike and Jordan brands has had a lot to do with FL’s higher sales in the last few years. This is particularly true in the United States. About 25% of the market for sneakers in the United States is comprised of basketball footwear.[2. The NPD Group]

Market leader Nike has a market share of more than 90% in basketball sneakers.[3. The NPD Group] Foot Locker has been steadily expanding the number of shop-in-shop arrangements with Nike over the years. Nike now accounts for 72% of Foot Locker’s purchases, compared to 56% in fiscal 2008.

Besides basketball, running and training shoes have also been responsible for the strong momentum experienced by Foot Locker, both inside and outside the United States.