On a YoY (year-over-year) basis, Oracle’s fiscal 3Q16 revenues and EPS fell by 3% and 6%, respectively. In the past seven quarters, including fiscal 3Q16, Oracle’s revenues have missed analysts’ expectations. Fiscal 3Q16 marked the fourth straight quarter for a fall in EPS. 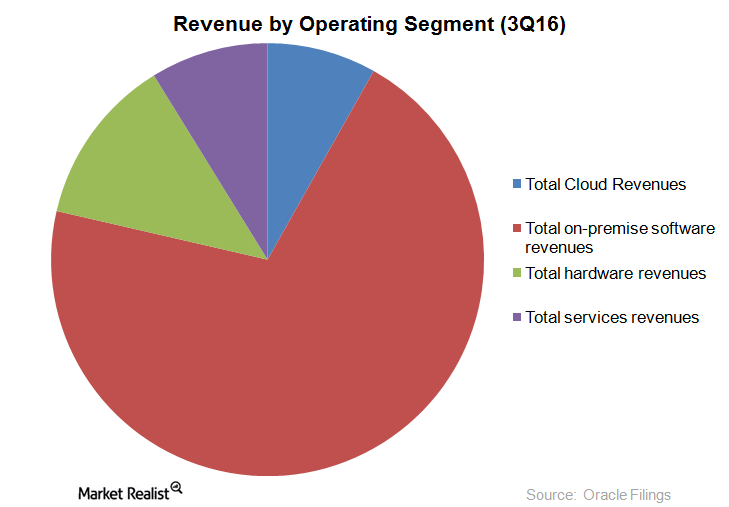 Although Oracle continued to report a decline in revenues in fiscal 3Q16, its cloud offerings continued to gain momentum. Oracle, like peers Microsoft (MSFT), IBM (IBM), and SAP (SAP), is currently in the process of transitioning toward the cloud.

The above graph shows the contribution of these operating segments toward Oracle’s consolidated revenues. In this series, we’ll look at the US dollar’s impact on Oracle. We’ll also look in detail at the performances for Oracle’s operating segments in fiscal 3Q16.

You could consider investing in the iShares US Technology ETF (IYW) to gain exposure to Oracle. IYW has an exposure of 45.2% to application software and invests around 3.4% of its holdings in Oracle.

In the next part of this series, we’ll see how a strong dollar impacted Oracle’s fiscal 3Q16 results.