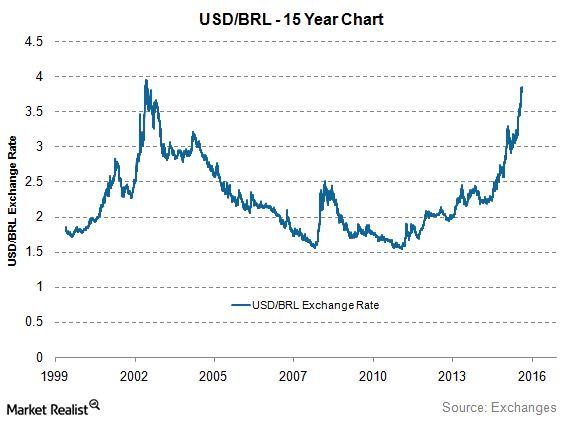 Severe problems in the Brazilian economy

There have been a slew of problems affecting the fair value of the Brazilian real this year. In the past, Latin American economies had been thriving on growing demand across the world for Chinese manufactured goods, the raw materials for which were exported from these South American nations. However, in the face of falling demand and a slowdown in China, economies that majorly rely on commodity exports have taken a hit.

Internationally, crude prices and basic metals have been falling in value, severely affecting exports. Also, inflation levels for Brazil are at a high level of 9.53% with a target level of 4.5%. Also, the political crisis engulfing the country with President Rousseff facing impeachment charges has been causing sluggish investment sentiment in the economy.

On a macroeconomic level, the country’s gross domestic product was in negative territory, while the manufacturing activity was way below the threshold level of 50, indicating a slowdown in production. In August 2015, the slew of competitive devaluation also took a toll on the Brazilian real after the sudden yuan devaluation that rocked emerging currency markets.

Brazilian ADRs (American depository receipts) were also on a similar down trend during this period, with the banking-related ADR Banco Bradesco (BBD) shedding nearly 54.13%. Airline company Gol Linhas Aereas Inteligentes (GOL) has also suffered heavy losses since the start of the year and saw a staggering 79.12% fall. In contrast, Brazilian brewing company Ambev (ABEV) posted a slightly lower fall of 16.47% since the start of the year.