The Coca-Cola Company (KO) and Pepsico, Inc. (PEP), are dominant players in the soft drinks market. Both companies own a strong portfolio of liquid refreshments and several brands that generate more than $1 billion in revenues. The two soft drink behemoths have extensive distribution networks and geographic presence in over 200 countries. 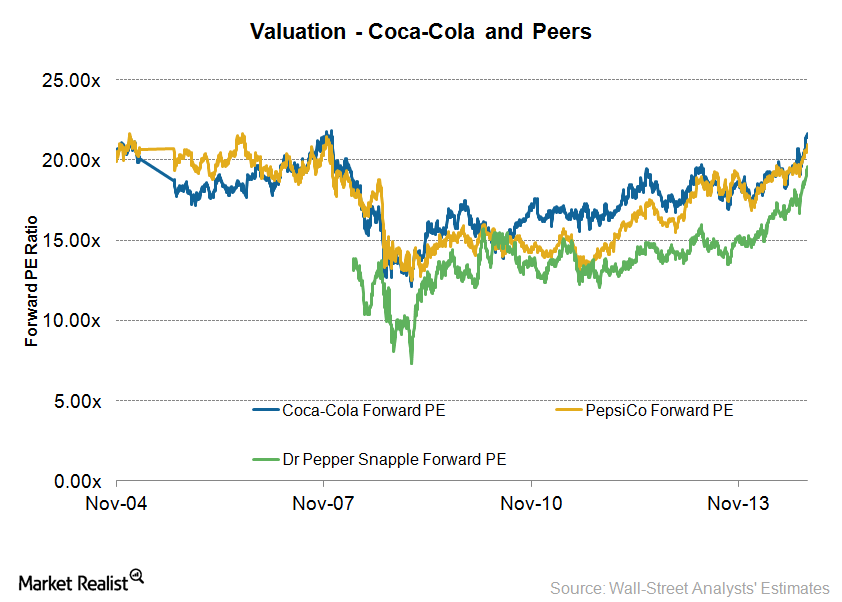 We use the price-to-earnings (or PE) ratio to value mature companies like Coca-Cola and PepsiCo that are similar from a shareholder’s standpoint. Between late 2010 and 2012, Coca-Cola was trading at a higher PE ratio. But since early 2013, PepsiCo is trading at similar PE multiples as Coca-Cola.

Unlike Coca-Cola, which focuses only on beverages, PepsiCo has a strong presence in the snack food category. This diversified model helps PepsiCo fare better through the current challenging times, when soda demand is continually declining. In 2013, PepsiCo’s food business accounted for 52% of its $66.4 billion revenues and includes well-established brands like Quaker, Lays, and Cheetos. Snacks and beverages are complementary food categories, and PepsiCo benefits from this combination.

According to Beverage Digest, in 2013, Coca-Cola held a 34.2% share of the liquid refreshment beverages (or LRB) market, which includes carbonated soft drinks (or CSD), bottled water, and non-carbonates like sports drinks, ready-to-drink teas, and juice drinks. Pepsico held 25.8% of the LRB market.

Exchange-traded funds (or ETFs) like the SPDR MSCI World Quality Mix ETF (QWLD) and the Consumer Staples Select Sector SPDR ETF (XLP) have holdings in both Coca-Cola and PepsiCo.