We’ve talked about the dual mandate and factors constraining the Federal Reserve from achieving this mandate. Let’s now assess how close the Fed has come to achieving these macroeconomic objectives of maximum employment and price stability. 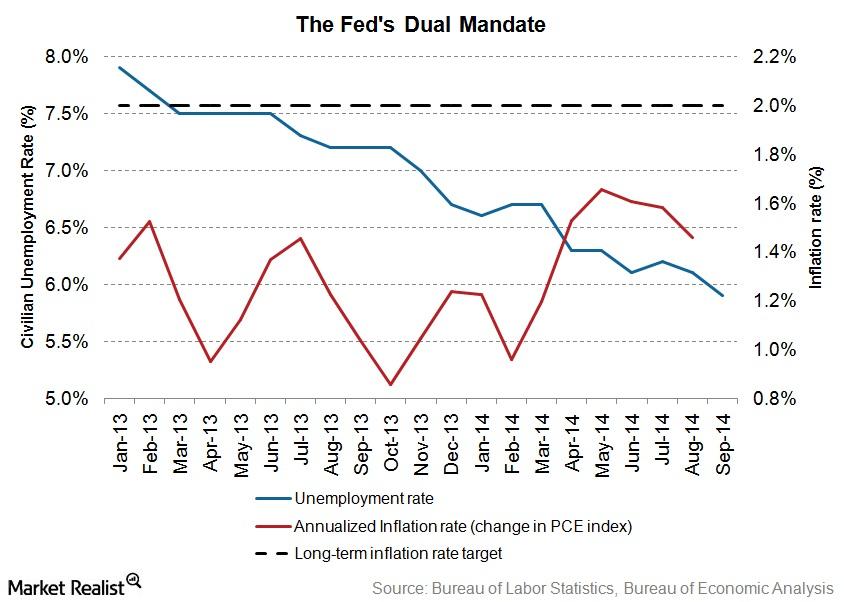 The unemployment rate in the U.S. stood at 5.9% as of September 2014, down from the 10% it had peaked to during the financial crisis of 2008–2009.The crisis had affected the U.S. economy badly. Broad stock market ETFs like the SPDR S&P 500 (SPY) and the iShares S&P 500 Index (IVV), real estate ETFs like the Vanguard REIT Index ETF (VNQ), and banks like Citigroup Inc. (C) and Bank of America (BAC) had all seen their prices slump.

The current inflation rate continues to hover around 1.5%—still five notches below its long-term target of 2%. In the Federal Open Market Committee’s (or FOMC) latest statement, the committee declared that it sees the risks to the outlook for economic activity and the labor market as nearly balanced, though inflation in the near term will likely be held down by lower energy prices and other factors. However, the committee did point out that the likelihood of inflation running persistently below 2% has somewhat diminished since early this year.

Next, let’s looking at the improving overall fundamentals in the U.S. economy. On October 29, the FOMC decided to conclude its asset purchase program this month.