Bond yields and prices move in opposite directions. As a result, returns on high-quality corporate bonds were positive. The BofA Merrill Lynch U.S. Corp Master Total Return Index value increased by 0.63% over the week. The Index is up by 5.84% this year. This year, demand for U.S. investment-grade debt benefited from geopolitical tensions overseas and economic growth fears in the first quarter. This raised prices and lowered yields on high-quality corporate bonds. 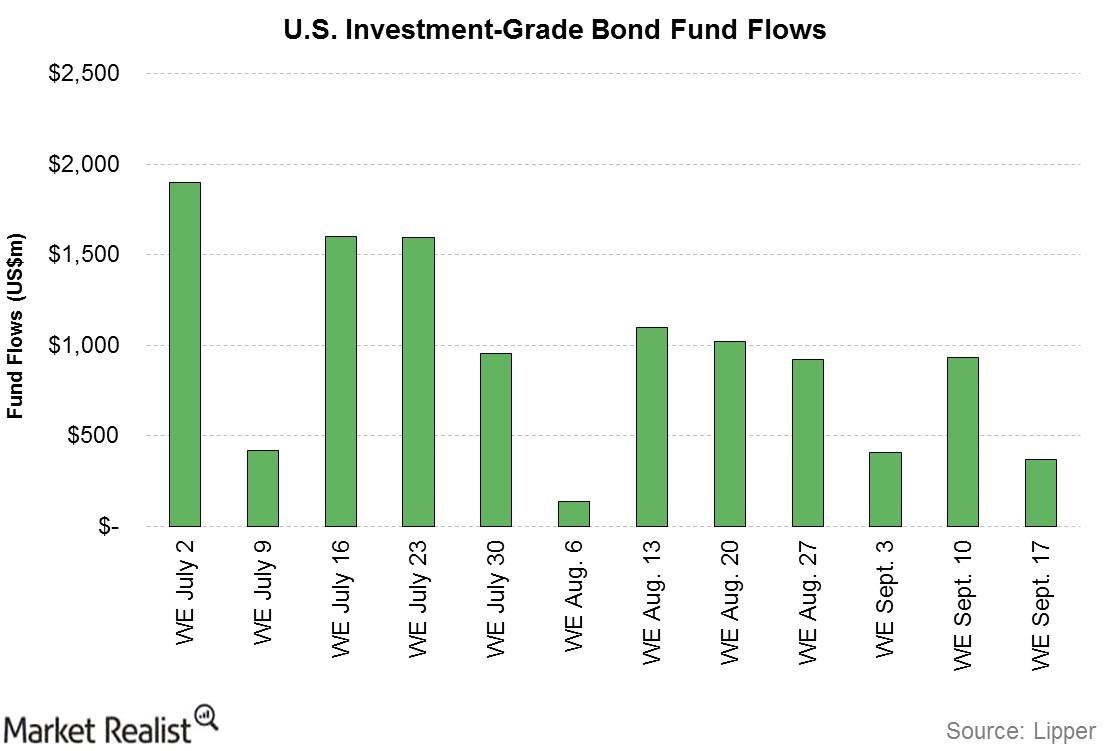 Returns on U.S. investment-grade bond ETFs versus other stock and bond funds

Bond prices and yields move in opposite directions. Due to the decline in yields, prices of corporate high-grade bond exchange-traded funds (or ETFs) benefited. The iShares iBoxx $ Investment Grade Corporate Bond Fund (LQD) was up by ~0.3% over the week ending September 19. The iShares Core Total U.S. Bond Market ETF (AGG) was up by ~0.1%. The Vanguard Total Bond Market ETF (BND) has holdings in Treasuries and high-quality corporate debt. It was up by ~0.1%.

Investment-grade mutual funds saw net inflows of ~$371.3 million in the week ending September 17. This marked the 14th straight week of inflows. Inflows were lower than the previous week’s inflows of $934.1 million. Some investors were apprehensive about the Fed’s Federal Open Market Committee (or FOMC), slated for September 16–17. Investors were wary of an earlier-than-expected rates increase. This impacted flows last week.

We’ll have more on the investor flows in our outlook section in Part 13 of this series. In the next four parts in the series, we’ll look at primary market activity in Treasury bills (or T-bills) last week.

In the next part of the series, you’ll find details about the 52-week, or one-year, T-bill auction held last week.