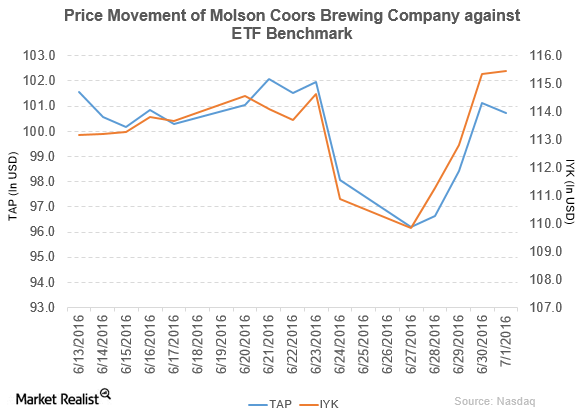 The iShares Dow Jones US Consumer Goods Sector Index ETF (IYK) invests 0.81% of its holdings in Molson Coors Brewing. The ETF tracks a market-cap-weighted index of stocks in the US consumer goods sector. The YTD price movement of IYK was 7.6% on July 1.

The Vanguard Large-Cap ETF (VV) invests 0.05% of its holdings in Molson Coors Brewing. The ETF tracks a market-cap-weighted index that covers 85% of the market capitalization of the US equity market.

The market caps of TAP’s competitors are as follows:

The company also priced its 800 million euro principal amount of 1.3% Senior Notes due 2024. It expects net proceeds from the offering of 794.6 million euros.

Moody’s Investors Service has downgraded the following ratings for Molson Coors Brewing and its subsidiaries: