Life after the initial public offering

In February 1992, The Cheesecake Factory (CAKE) went public by offering 2.3 million shares at $20 per share. The company closed its opening day at $27.3 per share.

By comparison, its peers Brinker International (EAT) and Texas Roadhouse (TXRH) went public in 1983 and 2004, respectively. Darden Restaurants (DRI) spun off from General Mills and started trading separately in May 1995. 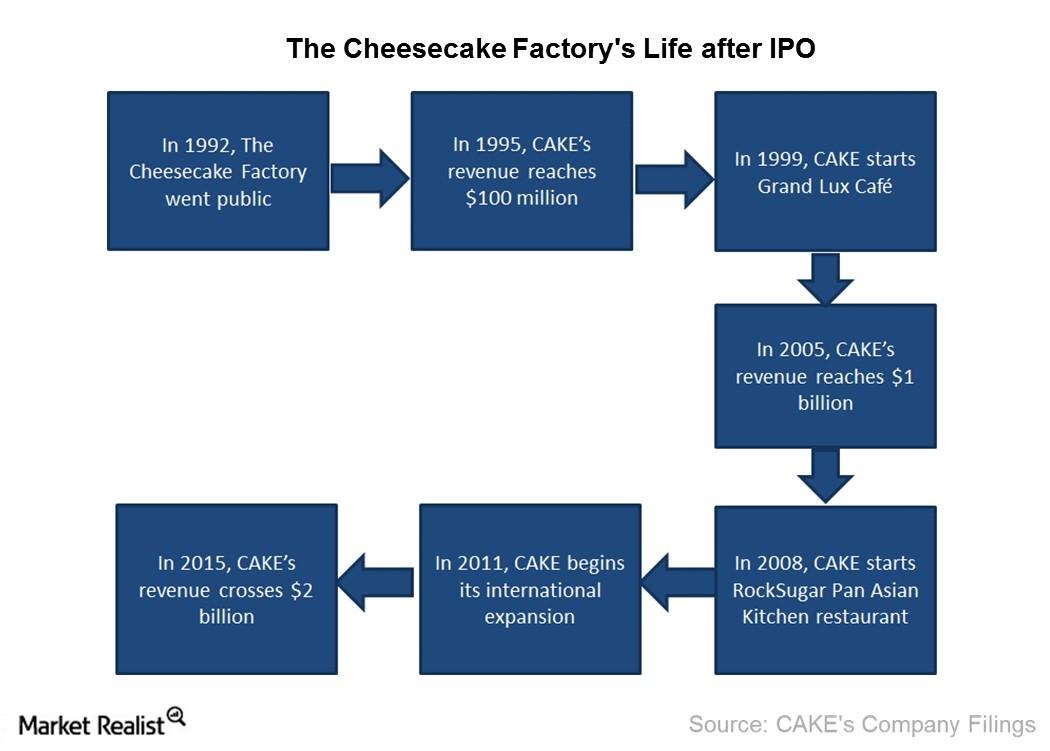 In its first year after going public, CAKE earned $4.7 million in profit on $51.9 million of revenue. The company, which forms 0.15% of the iShares Russell 2000 ETF (IWM), continued its expansion by opening three to four restaurants every year.

The company also implemented a policy of changing its menu twice a year to include all new menu items. By the end of 1995, the company’s revenue had crossed $100 million to reach $117 million, of which $8.6 million was profit.

As the popularity of The Cheesecake Factory grew, the company increased the pace at which it was opening its new restaurants. By the end of 2005, the company had operated 103 restaurants and had revenue of $1.2 billion.

In January 2011, The Cheesecake Factory entered into a licensing agreement with Alshaya, a Kuwait-based group of companies, to open and operate 22 restaurants over the next five years in five countries, including the United Arab Emirates, Kuwait, Bahrain, Qatar, and Saudi Arabia.

In August 2012, the company’s first international restaurant was opened in Dubai. In February 2013, the company extended its licensing agreement with Alshaya to include Latin America. The deal stated that Alshaya would develop 12 restaurants over the next eight years in Mexico and Chile, with the possibility of expanding into Argentina, Brazil, Colombia, and Peru.

CAKE also extended its expansion to Asia by signing a licensing agreement with Hong Kong–based Maxim’s Caterers. The deal stipulated that Maxim’s Caterers would develop least 14 restaurants over the next ten years in Hong Kong, Macau, Taiwan, and China. By the end of March 2016, the company operated 11 franchised restaurants in the Middle East and Mexico.

Apart from The Cheesecake Factory restaurants, CAKE also operates the Grand Lux Cafe and RockSugar Pan Asian Kitchen brands, which will be discussed later in this series.

As of March 2016, the company operated 188 The Cheesecake Factory restaurants, 12 Grand Lux Cafes, and one RockSugar Pan Asian Kitchen restaurant. Its total revenue in 2015 was $2.1 billion.

In the next article, we’ll discuss CAKE’s product mix.