It’s imperative to look at gold miners’ debt structures and liquidity. Gold miners should have enough liquidity to repay their debts, and if mining companies have higher debt and less liquidity, they may face cash problems. 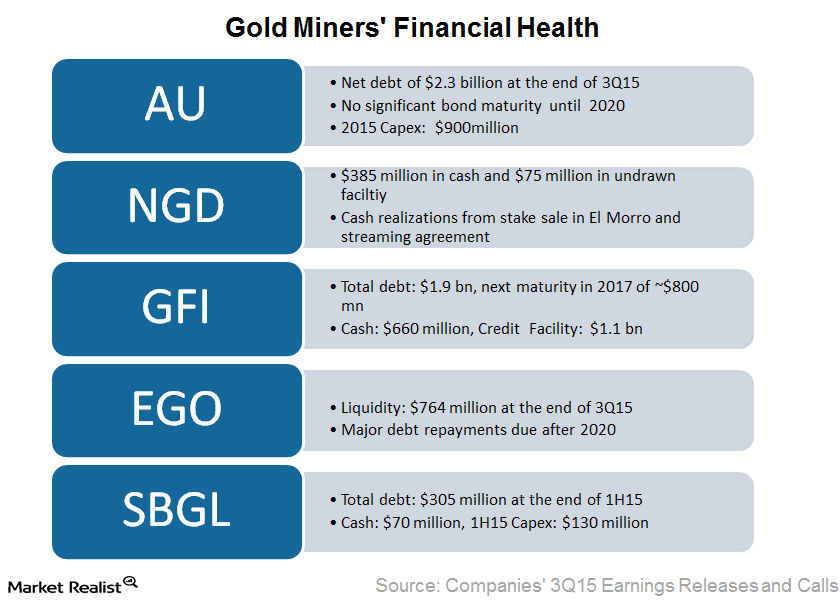 Eldorado Gold (EGO) is well placed financially. It had a liquidity of $763.8 million, including $388.8 million in cash, cash equivalents, and term deposits, as well as $375.0 million in undrawn lines of credit at the end of 3Q15. The debt maturity schedule is also comfortable, with major repayments coming due in 2020 and afterward.

Sibanye Gold (SBGL) had a total debt of $305 million at the end of the first half of 2015 with cash equaling $70 million. In October 2015, it announced the acquisition of Aquarius Platinum with an all-cash offer of $294 million. The deal is planned to be financed through Sibanye’s existing debt facilities. This should raise its leverage going forward, but it’s a value accretive and cash flow enhancing acquisition, and should ultimately support Sibanye’s dividend strategy.

By comparison, Gold Fields (GFI) has a higher debt of $1.9 billion with the mid-term maturity of $800 million in 2017. The company has a total liquidity of around $1.7 billion, including credit facility and cash.

While AngloGold Ashanti’s (AU) net debt fell by 21% year-over-year (or YoY) to $2.3 billion at the end of 3Q15, most of the fall is due to the sale proceeds of the Cripple Creek & Victor mine. Its debt is still a concern for investors though its debt maturity is comfortable, as the majority of the debt comes due after 2020. Going forward, paying off debt might become a problem for AngloGold, especially given high capex (capital expenditure) plans at ~$900 million per year.

New Gold (NGD) had $385 million in cash and $75 million in undrawn credit facility available at the end of 3Q15. The company also realized $60 million in sale proceeds from El Morro to Goldcorp (GG) and $238.2 million as a final installment of stream deposit for the Rainy River project. The company mentioned that the amount of free cash flow generated over next two years will determine the extent of debt drawn on their credit facility for Rainy River project.

Investors can consider the VanEck Vectors Gold Miners Index (GDX) to get exposure to publicly-traded gold mining companies. The five companies mentioned above account for 15.2% of the fund’s holdings.

In the next part of this series, we’ll analyze the free cash flow generation potential for these miners given their revenues, costs, and capex profiles.