In 3Q15, Charles Schwab (SCHW) reported daily average trades of 537,000, similar to 3Q15 and a fall of 5% from 4Q14. The company’s daily average revenue trades also rose by 1% from the previous quarter on the back of higher commissions. 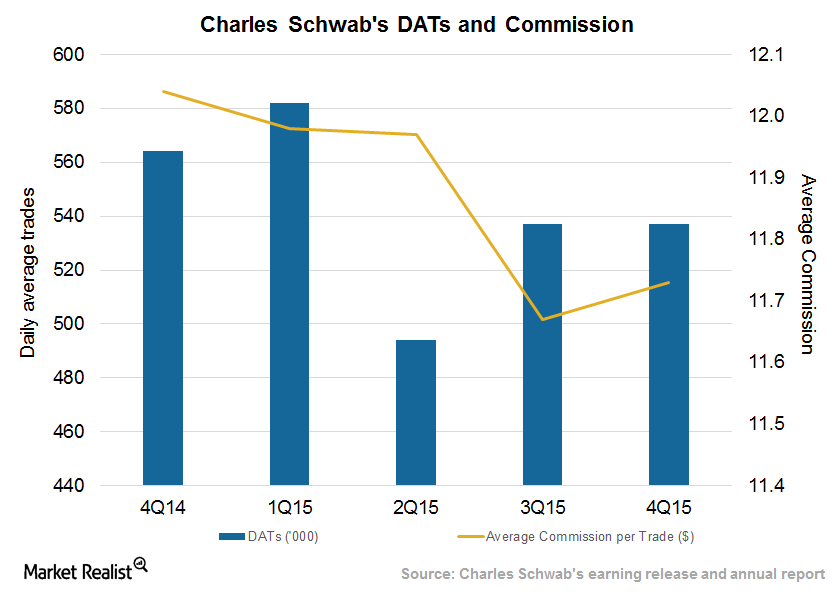 A fall in average trades from 4Q14 was mainly due to lower volatility across equities and exchange rates. Revenue trades fell 6% sequentially and 10% compared to the prior year’s corresponding quarter. Asset-based trades remained flat from 3Q15 and rose 5% from the prior year’s quarter. Other daily average trades in 4Q15 grew to 168,000, a 13% rise from 3Q15 and a 1% fall in comparison to 4Q14.

In 4Q15, the company’s trading revenues stood at $208 million, which was lower than the prior year’s quarter’s revenues of $239 million.

Charles Schwab invests and deploys its resources based on client needs and execution, which has resulted in the addition of assets despite sideways market returns, uncertainty, volatility, and continuing low interest rates. Its average commission costs are competitive when compared to those of its peers, resulting in higher client assets. Any spike in volatility in the upcoming quarters could benefit the company.

Here is how a few of the company’s peers in the brokerage industry have fared in terms of operating margins:

Together, these companies form 10.8% of the iShares US Broker-Dealers ETF (IAI).