Before the Kraft-Heinz merger completed in July 2015, the Kraft Foods Group already had a leading position in the North American food and beverage industry. According to 2014 revenue trends, Kraft Foods was the fourth-largest food and beverage company, behind PepsiCo (PEP), Nestlé SA (NSRGY), and the Coco-Cola Company (KO), holding the number one and number two position in 17 core categories. In fiscal 2014, which ended on December 27 for the company, Kraft Foods generated 98%% of its total sales from North America. 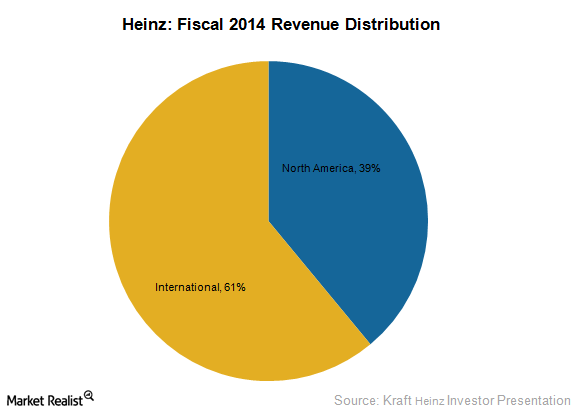 Heinz, however, was the leading international brand, with 61% of the sales coming from outside North America. Heinz had also been growing in emerging markets, which accounted for 25% of the Heinz sales in fiscal 2014, which ended December 31 for the company.

The following is a rundown of Heinz’s positioning prior to the Kraft-Heinz merger:

Kraft Heinz wants to be an international big gun

While the Kraft Foods Group generated 98% of its fiscal 2014 revenues from North America, Kraft brands have more than 80% awareness in 14 key international markets, whereas Heinz has a presence in 13 of these 14 markets. The combined company, the Kraft Heinz Company (KHC), could have the opportunity to improve its revenue by expanding into the untapped international market through the Heinz platform.

Continue to the next part of this series for a look at Kraft Heinz’s designs on Europe.