The benchmark—62% iron ore content, cost, and freight—seaborne iron ore prices have been relatively resilient in 3Q15. They fell ~6% during the quarter. Most of the time, iron ore prices hovered around $54–$57 per ton levels, which was higher than market expectations.

Restocking demand led by Chinese mills and traders was the main reason behind the relative strong performance of iron ore prices during the quarter, even as the fundamentals continued to deteriorate. Chinese economy continued to slow down. Its central bank eased further and devalued the yuan to kick start the economy. However, the manufacturing Purchasing Managers’ Index (or PMI), the gauge for factory activity, touched fresh lows during the quarter. 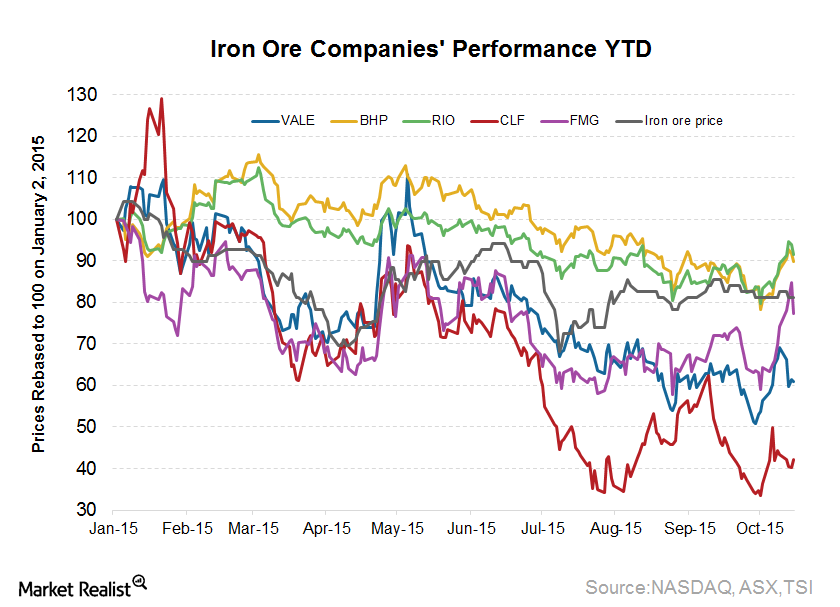 The third quarter of 2015 hasn’t been good for iron ore equities. Most of them lost significant value during the quarter. While supply addition plans from major iron ore producers such as BHP Billiton (BHP), Rio Tinto (RIO), and Vale S.A. (VALE) were intact, the expectation of additional capacity hitting the markets from Australia’s Roy Hill project later in 2015 led to the expectation of deteriorating fundamentals on the supply side. Demand side led by China continued to remain weak throughout the quarter.

RIO and BHP have been the best performers in the iron ore space with a year-to-date fall of 8.5% and 10.1%, respectively, compared to the drop in iron ore prices of 18.8%. Vale lost 39% of its value, while Fortescue Metals Group (FSUGY) and Cliffs Natural Resources (CLF) lost 22.6% and 57.7%, respectively, year-to-date.

BHP Billiton and Rio Tinto have reduced their per-unit costs significantly over 2014 and 1H15. This is helping them remain profitable even under the depressed iron ore price environment.

Vale still has a long way to go with the S11D iron ore project. This project will lower the company’s overall production cost. However, Vale needs funding to complete the project. Its cash flow requirement and the greater distance to Asia compared to BHP and RIO are the primary reasons for its relative underperformance.

For pure plays and smaller players like Fortescue and Cliffs, the remaining margin cushion is too low at current levels, making them much more sensitive to iron ore prices. Cliffs’s high debt also isn’t helping its stock price.

ETFs such as the SPDR S&P Metals and Mining ETF (XME) are good ways to get exposure to this sector without picking individual companies. Cliffs forms 3.4% of XME’s holdings.