As discussed in the last article, Under Armour (UA) declared 3Q15 results on October 23. Revenue performance was upbeat with sales rising 28.4% year-over-year to $1.2 billion. This was a record quarter for UA, with sales breaching the $1 billion mark for the first time. It was also the 22nd straight quarter of 20% or higher growth in the top line. 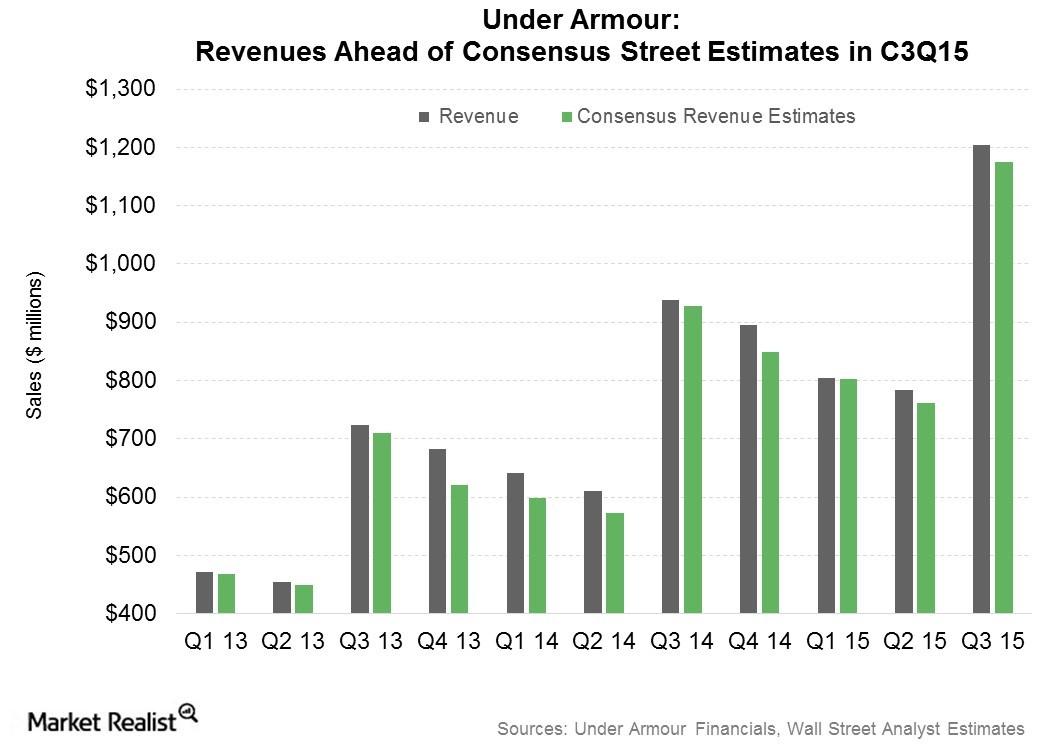 All three of UA’s reporting segments saw growth with North America sales rising 25% to $1.1 billion. The performance of its Other Foreign Countries segment saw higher growth with sales spiking 51.7% in reported terms and 67.8% in constant currency terms. UA’s sales contribution from the segment rose to 11% in 3Q15 compared to 9.2% in 3Q14.

Under Armour’s higher growth rate for its Other Foreign Countries segment stemmed partly from the relatively smaller base. The segment’s sales also benefited from market expansion, particularly in the UK and EMEA (Europe, Middle East, and Africa). The company also expanded its e-commerce presence in six new overseas markets. The company’s higher direct-to-consumer (or DTC) footprint in the Asia-Pacific region and partnerships with distributors were strong growth contributors to the Other Foreign Countries segment’s sales.[1. According to comments by Brad Dickerson, UA’s CFO and COO]

Under Armour is very bullish on the China (FXI) market. According to CEO Kevin Plank, sales in China came in at $3 million in 2012. The company projects ~$75 million in sales from China in 2015. In 2016, the company projects doubling this to about $150 million. A larger store footprint in China would be a key driver.

In fact, the Curry Two launch occurred in China in September, as UA’s CEO Kevin Plank toured Asia, along with Stephen Curry NBA MVP 2014-15, after whom the signature line has been named. UA opened its largest international brand house store in Shanghai in the last quarter.

Under Armour’s greatest rivals Nike (NKE) and Adidas (ADDYY) are also stepping up their presence in China and recording higher sales. Greater China sales rose 30.5% for Nike in the last quarter to $886 million. Adidas reported a 48% increase in Greater China sales in 2Q15 to 564 million euros. The increase was 19% in currency-neutral terms.