In this article, we’ll look at the Wall Street analysts’ recommendations and ratings for Cliffs Natural Resources that determine the current market sentiment for the stock. 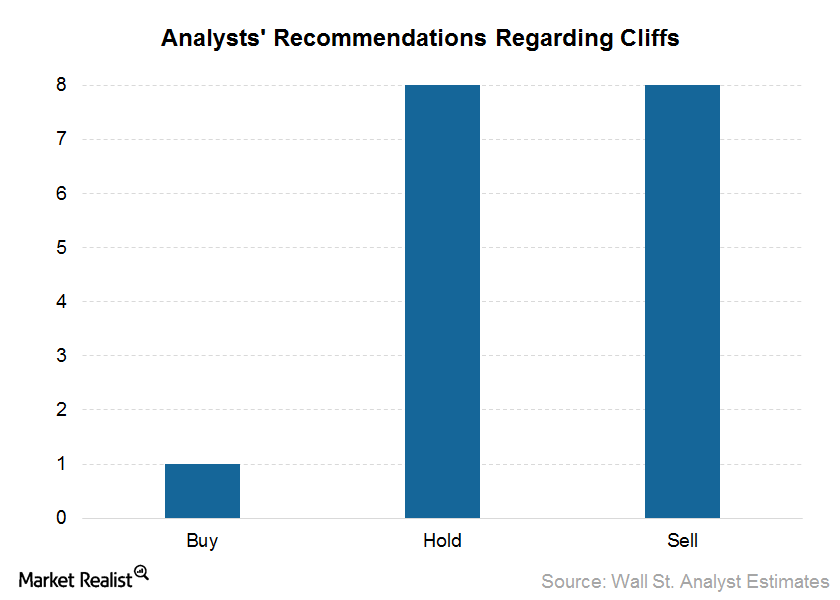 Market expectations for Cliffs Natural Resources (CLF) are varied. Of the 17 analysts covering Cliffs, eight recommend hold, one recommends buy, and eight have sell recommendations for the stock. This shows that the consensus forecast is still more tilted toward selling the stock. The current average consensus target price is $4.73, compared with a current price of $3.86.

In a note released on June 30, Bank of America Merrill Lynch reiterated its “underperform” rating on Cliffs’ share price, but downgraded its earnings estimate for 2015 by half ($0.10 from $0.20) on the back of lower iron ore and metallurgical coal price estimates. On the same day, Australia also reduced its iron ore price forecast for 2015 by 10% to $54.40 per ton. This resulted in a strong negative 9.6% price reaction for Cliffs on June 30.

Then came the Deutsche Bank’s target price reduction on June 2 from $5.50 to $5.00. This also elicited strong reactions from investors, as the stock fell another 8.3% in a day.

As far as market sentiment is concerned, Cliffs Natural Resources (CLF) seems to be on the receiving end. Most of it is due to the worsening current and future outlook for iron ore prices. This in turn is due to the supply glut by players such as BHP Billiton (BHP), Rio Tinto (RIO), Fortescue Metals Group (FSUGY), and Vale S.A. (VALE). These three stocks form 31.6% of the iShares MSCI Global Metals & Mining Producers ETF (PICK). The SPDR S&P Metals and Mining ETF (XME) also invests in this space.