Shell Midstream Partners (SHLX) has a 28.6% ownership in the Mars pipeline, and Shell Pipeline Company, or SPLC, has a 42.9% interest. BP (BP), through an affiliate, owns the remaining 28.5%. The pipeline is operated by SPLC. 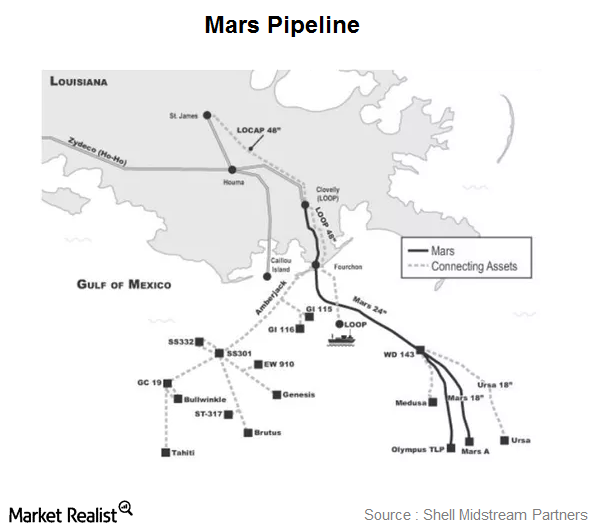 The Mars pipeline is approximately 163 miles in length and has a capacity of ~600,000 bpd (barrels per day). The pipeline services the offshore Gulf of Mexico. It originates approximately 130 miles offshore in the deepwater Mississippi Canyon and terminates in salt dome caverns in Clovelly, Louisiana, a major trading hub.

Salt caverns are created by drilling wells into huge salt domes and then injecting them with freshwater to dissolve the salt. The dissolved salt is pumped out and is then either re-injected into disposal wells or piped several miles offshore. This process creates caverns that can hold millions of barrels of oil.

The pipeline acts as a corridor to other pipelines in the area including the Medusa, Ursa, and Amberjack.

The Amberjack pipeline is jointly owned by Shell Pipeline Company, an affiliate of Shell (RDS.A), and Chevron (CVX).