Deposits fund close to 70% of BB&T’s (BBT) assets. Short and long-term debt fund 15% of the assets. Shareholders’ equity funds 13% of the total assets. Deposits are the cheapest funding source. Since deposits fund a major chunk of BB&T’s assets, the overall funding costs are low. 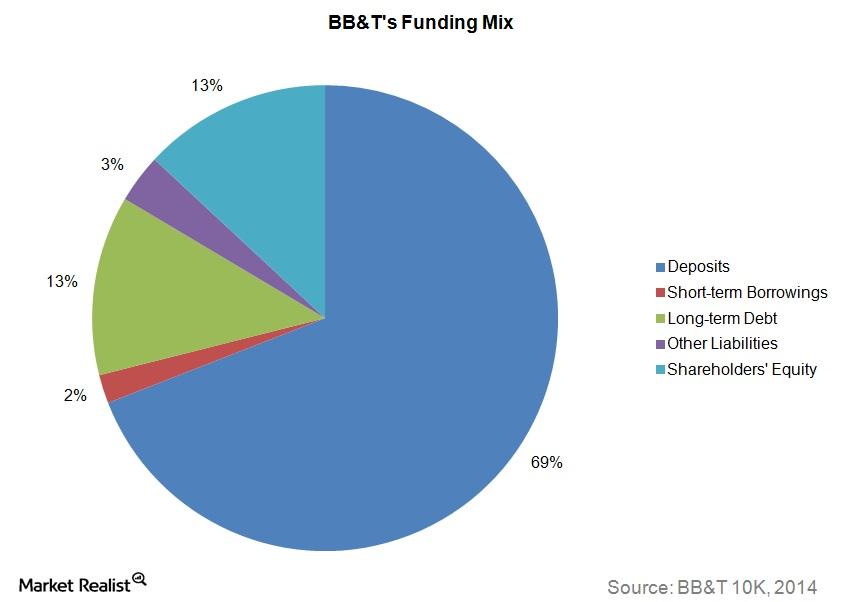 In addition to funding, long-term debt provides necessary regulatory capital. BB&T’s five-year bank debt spread to US Treasuries is one of the lowest among its peers. The spread indicates how many percentage points above the prevailing US Treasuries rate the bank has to pay on its issued debt. US Treasuries are considered to be risk free.

The spread over the risk-free rate increases, as the perceived risk associated with the bank-issued debt increases. It means BB&T can raise debt at a lower cost compared to its peers. This reduces interest expense. Also, it improves the bank’s net earnings.

The above graph shows the five-year bank debt spread to US Treasuries for BB&T and its peers. Only US Bancorp (USB) has a lower spread of 0.85%—compared to BB&T’s 1%. The other banks, including SunTrust Bank (STI) and Regions Financial (RF), have a higher spread to Treasuries compared to BB&T.

A bank’s credit rating affects the cost and availability of financing. Reductions in credit ratings could increase the cost of funds. It could decrease the number of investors willing to lend to the firm.

Among BB&T’s peer group, only US Bancorp has credit ratings higher than BB&T. This is reflected in US Bancorp and BB&T’s lower spreads to Treasuries. We discussed this above.

The cost of funds impacts a bank’s net interest margin, or NIM. You’ll learn more about BB&T’s NIM in the next part of this series.