Dr Pepper Snapple Group Inc. (DPS) derives its revenues from the sale of carbonated soft drinks (or CSDs) and noncarbonated beverages (or NCBs) like ready-to-drink tea, juices, and mixers. The company’s business is organized into the following three categories: 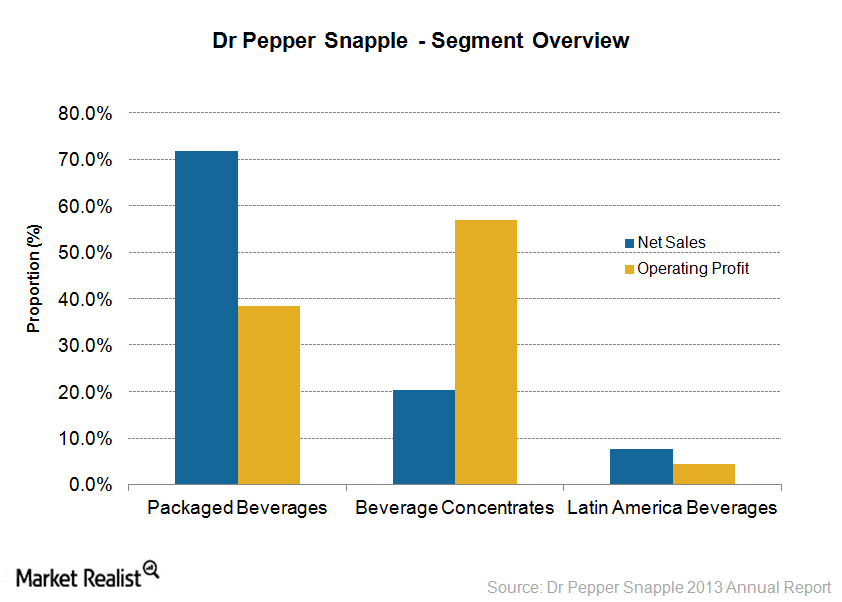 The packaged beverages segment derives revenues from the sale of finished beverages, including the sale of certain third-party brands, in the United States and Canada. The segment contributed 72% of the company’s 2013 revenues and 38% of the total segment’s operating profits.

The beverage concentrates segment is the most profitable segment. It accounted for 20% of the 2013 revenues and a significant 57% of the total segment operating profits. This segment derives its revenues from the sale of branded concentrates and syrups, mostly CSD brands, to third-party bottlers mainly in the United States and Canada.

The Latin America beverages segment sells concentrates, syrups, and finished beverages in the Mexico, Caribbean, and other international markets. The segment contributes 8% of the revenues and 4% of total segment operating profits.

Selling concentrates is more profitable for Dr Pepper Snapple than the sale of finished beverages. This is because the sale of finished beverages, which involves bottling and distribution, is a more capital-intensive, low-margin business. Even soda giant The Coca-Cola Company (KO) is refranchising its North American distribution network to independent bottlers. Coca-Cola expects its margins to improve with the planned refranchising of North American bottling territories by the end of 2017 and a substantial portion of the remaining territories by 2020.

You can invest in consumer staples companies such as Dr Pepper Snapple, Coca-Cola, PepsiCo Inc. (PEP), and Monster Beverage Corporation (MNST) through ETFs such as the Consumer Staples Select Sector SPDR Fund (XLP).