CFF is a key “intermediary” between a company and its sources of capital. It also shows cash returned to shareholders through share repurchases and dividends. 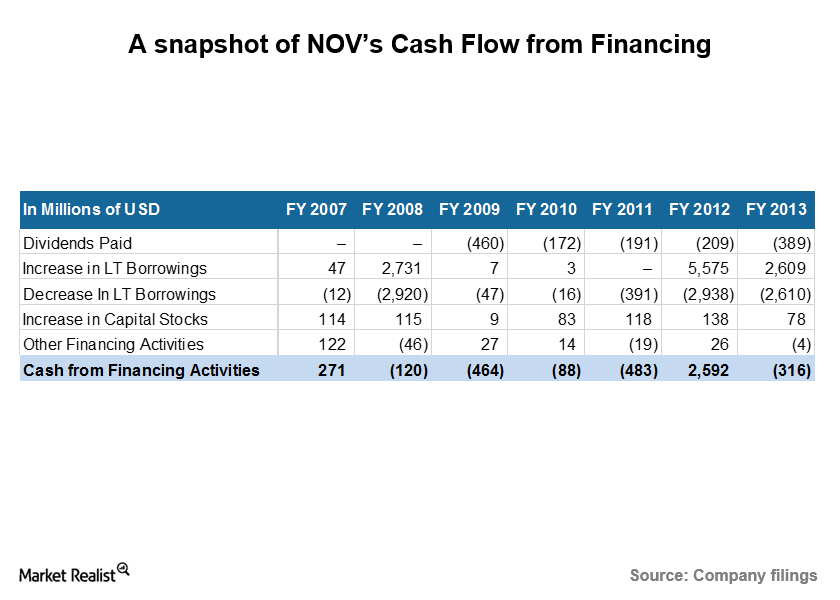 NOV has already paid dividends amounting to $1.18 in the first three quarters of 2014.

Although NOV has seen some small increases in capital—through the issuance of new stock—the company hasn’t bought back shares in the last seven years.

That changed on September 30 when NOV announced a $3 billion share repurchase program. The program was spread over 36 months. The market reacted negatively to the news. The market probably viewed the move as a sign that the company isn’t able to deploy its huge cash hoard more effectively in high return projects.

The repurchases will show up under NOV’s CFF as cash outflows—negative numbers—in the future as it buys shares.

The major items affecting CFF are usually long-term (or LT) borrowings and repayments. As seen in the above table, NOV has been managing its LT debts effectively with regular raises and repayments.

These activities helped keep NOV’s LT borrowings below a billion dollars until 2011. See Part 6 in this series for a snapshot of NOV’s balance sheet and LT debts.

NOV increased its LT debt to ~$3.1 billion in 2012. It coincided with large acquisitions in 2012 and 2013. See Part 9 in this series for a snapshot of NOV’s investing activities.

Despite the large upswing in its debt, NOV’s cash—and equivalents—exceeds its debts. We’ll discuss this more in the next part of the series.