Sprott Resource Corp., SRC (SCPZF), employs a disciplined approach when looking for investments. You can take this with a grain of salt but the company lists the fact that they have done due diligence on over 1,000 deals. They have only taken part in 12, for around a 1% transaction rate. This shows them to be very risk-averse. The management team obviously has a deep-value mentality. They believe in buying low and selling high; not in the momentum game of buying high and trying to sell higher. Sprott doesn’t look for companies with exploration risk. Rather, they look for resources that are mispriced, meaning they have something unique about them or are scarce. They also, like CUSH, look for management teams that are experienced and they expect their management teams to be personally invested in their companies.

When evaluating a management team, an investor can infer a lot from their history of successfully compounding capital over time, and Sprott is impressive in this regard. From September 30, 2007, to September 30, 2012, management was able to achieve a 28% internal rate of return (IRR) on invested capital, net of fees. What was impressive about this is that this was done in a down market for the Canadian resource market. Although gold and silver were up in that time frame, gold and silver stocks were not, as well as other resource plays. SRC was able to buy into depressed sectors and then monetize them when they came back. The details of this performance can be viewed on the following chart, which was found in their November 2013 Investor Presentation. 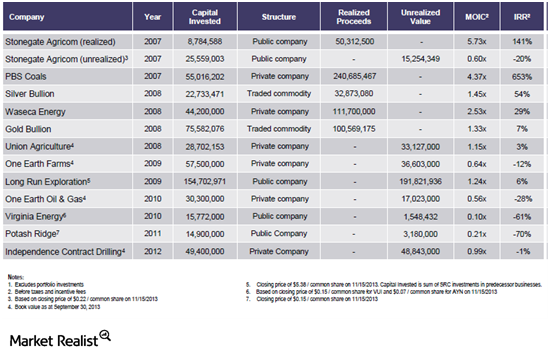 We would like to mention the fact that, again, we are looking at the track record of this management team and their decades of investing experience. We can see that their performance with SRC only comprises a few completed deals. One of these deals, PBS Coals netted them a 653% IRR. We understand that the 28% IRR is certainly helped by that. We have gone back and studied the history of this management team, especially Eric Sprott, and come to the conclusion that this is a top flight talent.

SRC’s management and their employees own around 9% of this company. This number has come down from 14% later in 2013 but some of that most likely is because of Mr. Bambrough’s departure and the fact that he is no longer considered an insider. This kind of insider ownership is what we like to see, as we view them as having shareholder-friendly policies and incentive alignment; they have “skin in the game.”

One of the markers we have been waiting for to take another position in this stock is insider ownership by the current management team. The following chart shows three insiders purchasing stock in January of 2014:

The company had a program in place to buy their own stock on a per-day basis, which was set at $19,000 per day. According to the 2012 annual report, they were buying as long as the stock price was below $4.60. The company believes that it is in the best interest of its shareholders to purchase shares for cancellation when they are trading at a significant discount relative to their value. We do not see that specific language in the third quarter 2013 MD&A, their latest filing, because they reinstituted a new buyback program on September 10, 2013, to replace their 2012 program that ended on August 31, 2013. According to Mr. Yuzpe, this language was taken out because the Automatic Repurchase Plan (ARP) makes you put in a price for a year that cannot be changed. Because of the upheaval at the company and the decline in the stock price, they did not feel comfortable putting in a price for that long a time. They have received approval from the TSX to begin to repurchase up to 8.5 million of its common shares, ending on September 9, 2014.

SRC’s management said in its annual shareholder letter that going forward, it will continue to pursue opportunities to invest in businesses across the capital structure, consistent with its resource-focused private equity model. The focus is on investments where it can earn equity-like returns with attractive risk-to-reward profiles. The company has in the recent past committed $5 million for a royalty interest in a number of liquids-rich natural gas wells to be drilled by a Calgary-based producer in Northwestern Alberta.

One of its recent investments was Independence Contract Drilling, Inc. (ICD), a U.S. private oil services company specializing in the manufacture and operation of oil and natural gas drilling rigs. The company is finalizing construction of its eighth rig, equipped with multi-directional “walking” and bi-fuel systems, which was to be deployed this month to a large exploration and development company operating in the Permian Basin. All of ICD’s fielded rigs are working in the Permian Basin with what ICD management believes are industry-leading drilling performance metrics. Construction of ICD’s ninth and tenth rigs is currently underway. Concho Resources (CXO) Apache Corp. (APA), Pioneer Natural Resources (PXD), Devon Energy (DVN), and Resolute Energy Corp. (REN) are some of the players operating in the Permian Basin.

In August of last year, SRC cancelled the dividend policy that had been instituted in December 2012. At the time the dividend was initiated, management believed that it was sustainable and in the best interests of the shareholders. However, amid the challenging market conditions in 2013, the company was forced to cancel the dividend in order to better manage its capital plans. It said it remains committed to enhancing shareholder value and increasing net asset value per share through its long-standing normal course issuer bid and buying back shares for cancellation when the share price doesn’t fully reflect the net asset value of the business. In 2013, SRC repurchased 3.7 million shares for cancellation and said it was active in buying back shares in early 2014.