ONEOK (OKE) and ONEOK Partners (OKS) are scheduled to report their 2Q16 results on August 2. Analysts expect OKE’s 2Q16 EBITDA (earnings before interest, tax, depreciation, and amortization) to be ~$437 million. This is 22% higher than the analyst-adjusted EBITDA of $360 million in 2Q15. The 2Q16 expected EBITDA is also higher than the adjusted 1Q16 EBITDA. OKE missed EBITDA estimates in six out of the last ten quarters. 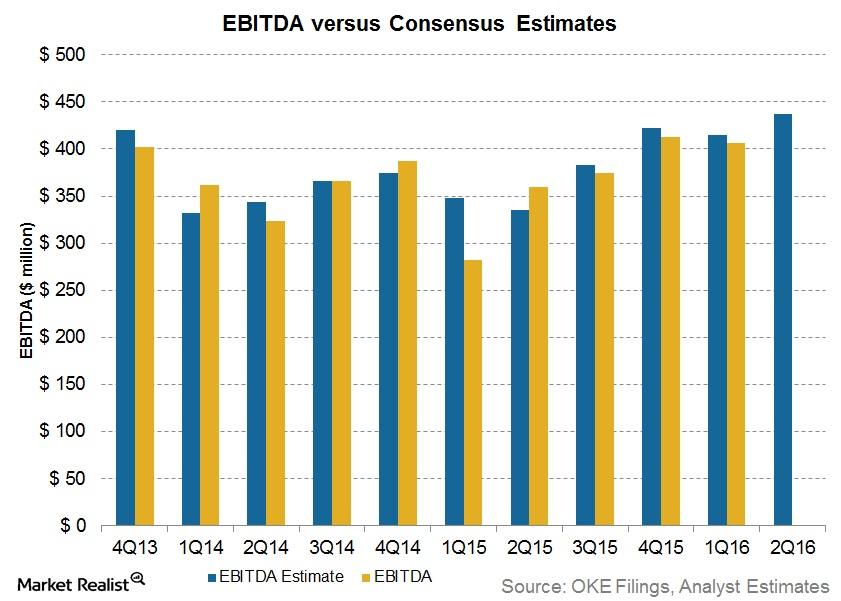 The above graph compares OKE’s EBITDA estimates with its adjusted EBITDA. Enterprise Products Partners (EPD) and Spectra Energy (SE) are scheduled to report their 2Q16 results on July 28 and August 3, respectively.

ONEOK operates as a pure-play general partner of ONEOK Partners. The company’s EBITDA growth in 1Q16 was driven by:

OKE also benefitted from increased distributions from OKS. Terry K. Spencer, president and CEO of ONEOK, said in the 1Q16 earnings release, “Distributions declared from the partnership to ONEOK increased nearly 17 percent in the first quarter 2016, compared with 2015, driven by ONEOK’s increased ownership in ONEOK Partners.”

In this series, we’ll look at ONEOK’s expected segmental performance in 2Q16, its recent stock performance, the company’s future outlook, and analysts’ price targets for the stock.

Let’s see which segment may drive OKE’s EBITDA growth in 2Q16 in the next part of this series.