Previously in this series, we looked at Honda’s (HMC) marketing strategy and how it helped the company expand its business in Japan and its key overseas markets. Overall, the company’s marketing approach is similar to that used by other major automakers (VCR) such as General Motors (GM), Ford (F), and Fiat Chrysler (FCAU).

Now, let’s look at the recent trends in Honda’s revenue. 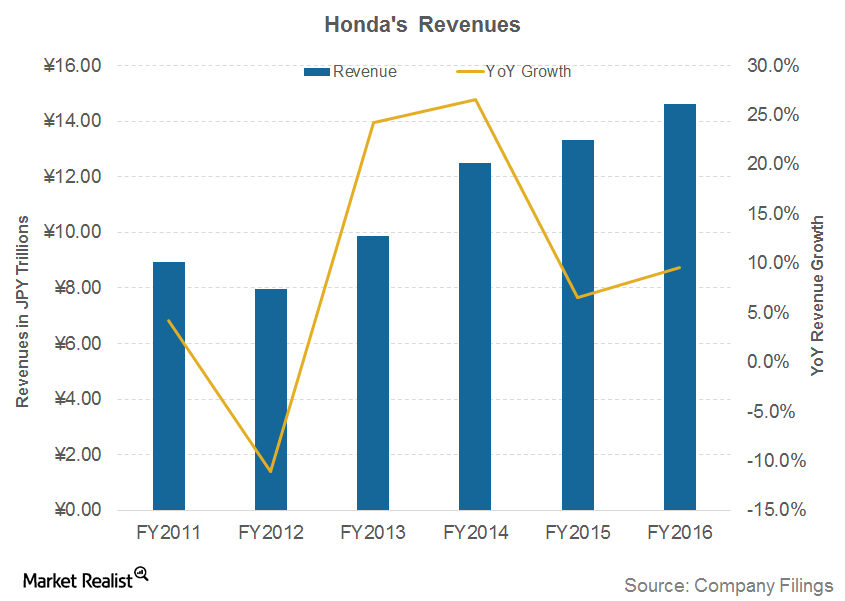 According to a May 2016 report published by Forbes, Honda is the 36th-largest company in the world by revenue. The company is not directly listed in the US, although its ADRs (American depositary receipts) are traded on the NYSE.

As a Japanese automaker, Honda Motor Company reports its earnings in yen. As a result, investors should pay attention to the company’s yen revenue to better understand the trends. The fluctuation in foreign exchange rates of the US dollar against the Japanese yen could lead to confusion if we look at Honda’s revenue in dollar terms.

Behind the trend in Honda’s revenue

Honda’s North American revenue and profitability also benefited from the recent weakness in the Japanese yen against the US dollar. We’ll discuss this in the next part of this series.

Read on to the next part to learn about Honda’s profitability.