As we saw in earlier parts of the series, Nvidia’s (NVDA) revenue is difficult to estimate, as it is largely dependent on end-consumer demand. Revenue is dependent on several factors such as design wins, pricing, advanced features, technology trends, and meeting tight delivery schedules. While Nvidia’s revenue is volatile, some of its expenses are fixed.

In the coming parts of the series, we’ll explore Nvidia’s cost and capital structure and what investors can expect from its stock. 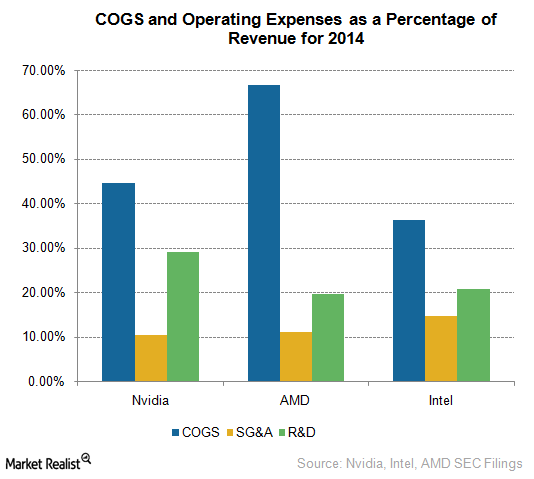 A fabless semiconductor company’s COGS (cost of goods sold) includes the cost of semiconductors purchased from subcontractors, manufacturing support costs, the fallout from the final test, inventory and warranty provisions, and shipping costs.

As seen in the above graph, Nvidia’s COGS is around 40% of its revenue, whereas Advanced Micro Devices’ (AMD) COGS is more than 65%. Intel’s (INTC) COGS is below 40% of its revenue, as it manufactures chips in its own facilities and enjoys the benefit of advanced technology and economies of scale. Like Nvidia, fabless chipmaker Qualcomm (QCOM) has COGS of around 40%.

Nvidia’s and AMD’s SG&A (selling, general, and administrative) expenses are almost flat, at around 10% and 11%, respectively. Intel’s is slightly higher, given its large size and diverse portfolio.

Looking at R&D (research and development) expenses, Nvidia spends more than Intel on R&D as a percentage of revenue, because it employs a fabless model while Intel employs an IDM (integrated device manufacturer) model.

In an IDM model, a company handles the end-to-end process, from product designing to manufacturing to marketing. If we consider other fabless companies AMD and Qualcomm, which spend between 20% and 22% of their revenues on R&D, Nvidia tops the group with 29%.

Looking at overall expenses, Nvidia has its expenses under control and is poised to deliver stable returns in 2016. The company’s ROE (return on equity) has been hovering between 10% and 15% over the past five years, whereas AMD’s ROE has been at extreme, from 37% in 2011 to -110% in 2014.