In 3Q15, Noble Energy’s (NBL) total operating revenue was ~$801 million, ~37% lower than in 3Q14. The much lower operating revenue in 3Q15 was the direct result of lower realized prices for natural gas and liquid production.

In 3Q15, the company reported an OCF (operating cash flow) of ~$520 million, which was ~45% lower than its OCF of ~$945 million in 3Q14. The drop was also primarily due to the lower revenues reported in the same period. 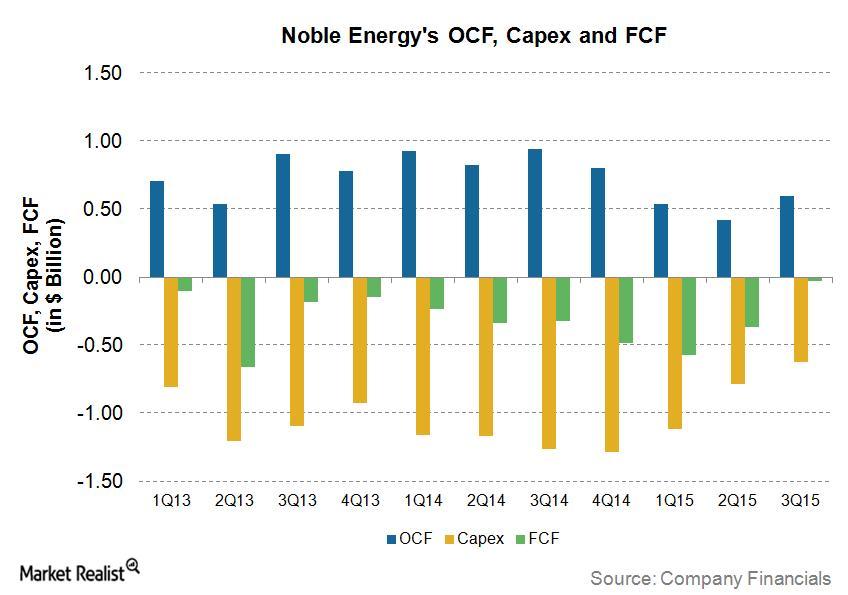 As seen in the above chart, Noble Energy reported negative but improving free cash flows in 2015. In 3Q15, the company reported an FCF (free cash flow) of approximately -$23 million. Due to the steep downward trend in energy prices, FCFs of almost all S&P 500 (SPY) energy companies fell in 3Q15. Pioneer Natural Resources (PXD), EOG Resources (EOG), and Occidental Petroleum (OXY) reported FCFs of -$194 million, -$225 million, and -$64 million, respectively, in 3Q15.

FCF helps a company enhance shareholder value, and can be used to pay dividends, buy back stock, or repay debt. FCF is calculated by subtracting capital expenditure, or capex, from OCF.

Noble Energy lowered its fiscal 2015 capex guidance to slightly below $3 billion, a reduction of ~$100 million from its original estimates. Therefore, the company’s total capex in 2015 will be ~39% lower than its capex of ~$4.9 billion in 2014. For 2016, Noble Energy projects that its capital spending program will be below 2015’s levels.