Soybean futures contracts for November trading on the Chicago Board of Trade (or CBOT) increased by 0.40% and closed at $8.82 per bushel on November 4, 2015. Soybean futures prices rose due to supportive export demand sentiment. Following the increase on the CBOT, the Teucrium Soybean ETF (SOYB) also rose by 0.40% on November 4. 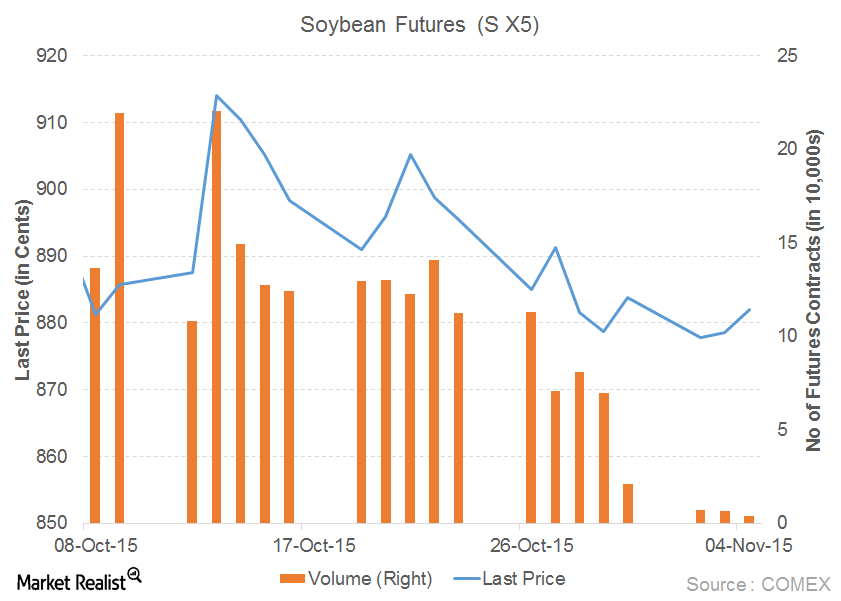 The stronger export demand for soybeans has supported the futures prices. However, analysts expect that the increased crop expectation, released by the US Department of Agriculture’s World Agriculture Supply and Demand Estimation (or WASDE) report, would support supply sentiment and push the prices for soybean futures down. Soybean prices received support to increase by 0.40% from increased export demand, which exceeded rising stock levels and stronger sentiment of declining soybean prices on November 4, 2015.

Favorable weather conditions in South America have kept the production estimates high. However, the supply has not increased significantly, according to the analysts’ expectations. Producers in Argentina have held the soybean crop longer than expected in anticipation of high prices, which are in line with the country’s November 22 election results.

A majority of producers may try to push the operational cost lines and hold the stock until the release of the election results. However, a shift to an export-supportive policy might require additional time for the new government. The local and international market could feel the stress due to the supply reduction, which could help soybean futures prices during the next two weeks.