Magnetar Capital added new stake in Restaurant Brands International (QSR) in 4Q14. The fund acquired ~1 million shares in the company. The position represented 0.73% of its holdings at the end of the year. 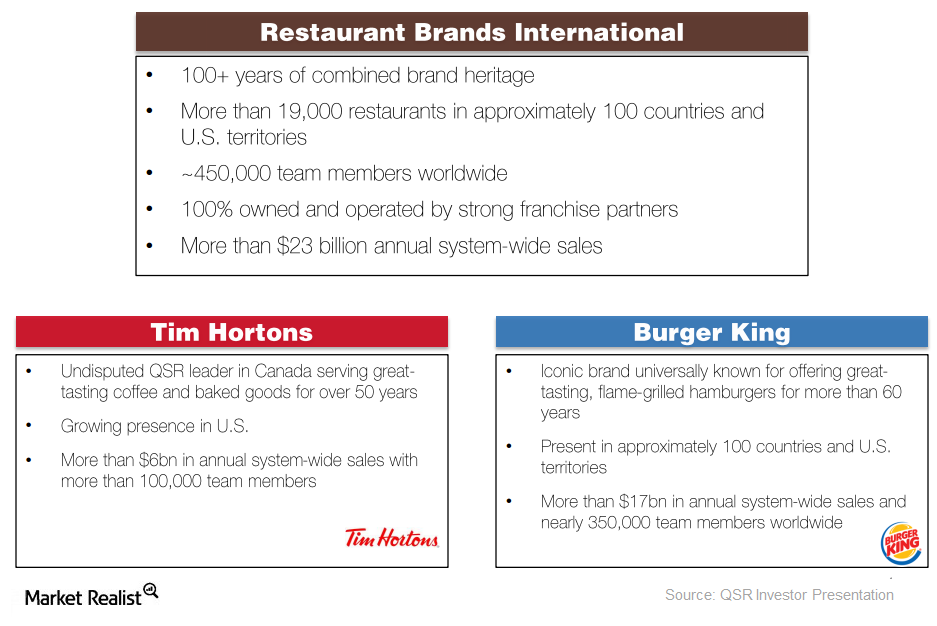 In December 2014, Burger King acquired Tim Hortons, in a transaction worth $11.3 billion, to form Restaurant Brands International (QSR). With nearly $1.2 billion in total revenue, Restaurant Brands International is based in Canada. It’s a holding company that owns and operates Burger King and Tim Hortons. Through these brands, its operations comprise over 19,000 restaurants in roughly 100 countries.

In terms of the total number of restaurants, Burger King is the second largest fast food hamburger restaurant chain with 14,372 restaurants. It’s only behind McDonald’s (MCD).

Tim Hortons is a leading quick service restaurant chain. It has 4,671 stores predominantly spread across Canada and the US. Tim Hortons’ chief rivals include Dunkin’ Brands (DNKN), McDonald’s, Panera Bread (PNRA), and Starbucks (SBUX)—among others.

Both Burger King and Tim Hortons were primarily operated under the franchise model.

As noted above, in December 2014, Burger King completed the acquisition of Tim Hortons. The acquisition created Restaurant Brands International. The transaction was valued at about $11.3 billion. It was ~$7.5 billion in cash and $3.8 billion in the exchange of shares. The cash component was financed through external borrowings.

Adjusted EBITDA (earnings before interest, tax, depreciation, and amortization) on a same-store sales basis was up 3.8% YoY to $189.1 million. Due to one-off operating expenses and loss on early debt extinguishment, the company booked a net loss of $514 million in contrast to net profit of $67 million in 4Q13.

Restaurant Brands International is part of the iShares Russell Midcap Growth ETF (IWP). It accounts for 0.25% of the IWP.

In the next part of this series, we’ll discuss Magnetar’s new stake in McDonald’s.