Mobile commerce is a key growth driver for Alibaba

Alibaba (BABA) continues to be the unrivaled leader in the mobile space. For the quarter ending in December 2014, Alibaba achieved 265 million monthly active users on its mobile commerce apps. This is a sequential growth of 22%. It’s a year-over-year, or YoY, growth of 95%.

According to iResearch, Alibaba leads the China mobile commerce market with an 86% share of the total mobile GMV (gross merchandise volume). Its mobile Taobao app continues to be the number one mobile commerce app. It’s one of the most popular mobile apps in China. Mobile commerce represents one of Alibaba’s key growth opportunities. 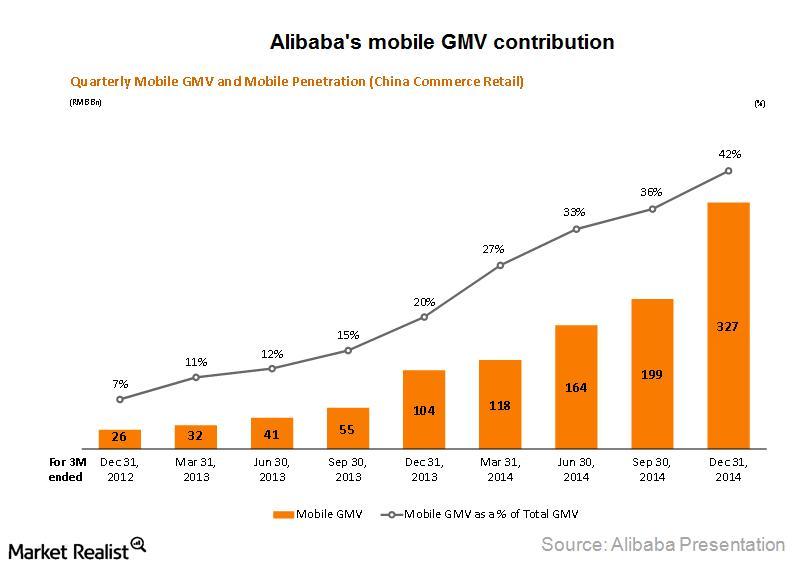 In December, Alibaba reported that through the first ten months of 2014, 54 out of every 100 payments made with Alipay came from mobile devices—compared to 23 payments in 2013.

Alibaba positioned itself as a mobile company. Its mobile strategy is expanding its reach by attracting new consumers to its retail platforms. Alibaba introduced a large number of mobile users to its platforms. It had a successful response from both the Singles Day shopping festival and the 12-12 promotion.

Singles Day is the equivalent of Cyber Monday. It’s an annual retail holiday in China. It set a new record in e-commerce history. It processed more than 9 billion sales in a single day in 2014. Back in the 1990s, the idea of Singles Day came from several college students. They thought about the numeral form of the date—November 11, or 11-11. Soon, they started recognizing the day by purchasing small gifts for fellow single peers. Alibaba embraced the day. It started the Singles Day shopping festival.

Double 12, or 12-12, was introduced by Alibaba to promote its Taobao Marketplace. The marketplace mainly consists of small and midsize retailers.

Management believes that new mobile customers have experienced the ease and convenience of shopping on its platforms. This will help drive even more GMV growth in the future.