On August 1, 2014, Scientific Games (SGMS) and Bally Technologies, or Bally, entered into a definitive merger agreement. According to the terms of the agreement, Scientific Games, or SGMS, agreed to acquire all outstanding Bally common stock for $83.3 cash per share. This represents a ~37% premium on Bally’s closing stock price on July 31, 2014. Here are the highlights of the deal: 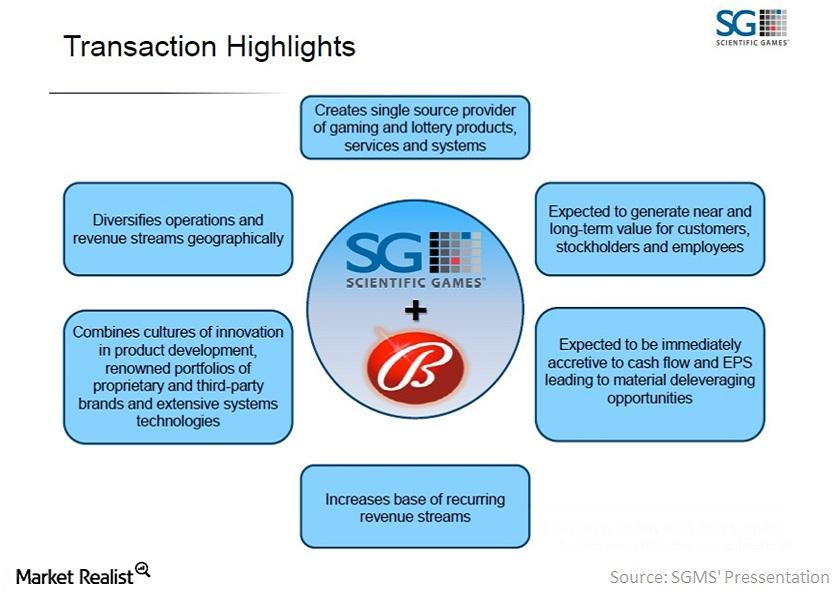 On November 18, 2014, Bally’s shareholders approved the merger. Soon after, the Gaming Commission approved the merger. Obtaining the required gaming regulatory approvals was made easier by the fact that both SGMS and Bally are licensed in more than 300 gaming jurisdictions worldwide.

On November 21, 2014, SGMS announced that the merger with Bally had been completed.

Gavin Isaacs, President and CEO of SGMS, said, “With leading gaming, lottery, and interactive content, world-class systems capabilities and table game offerings, we believe that the combined company will be uniquely positioned as a strategic partner for gaming and lottery operators, offering a highly diversified suite of value enhancing products and services across multiple worldwide distribution channels and platforms.”

Richard Haddrill, Bally’s CEO, said, “The combination with Scientific Games will benefit our customers and shareholders. Increased scale, geographic diversity and product development capabilities will create a new runway of growth opportunities through new products and a comprehensive portfolio of customer-focused solutions. This transaction delivers immediate value to our shareholders and the highest share price in our history…”

In August 2013, Pinnacle Entertainment (PNK) acquired Ameristar Casinos in a transaction valued at about $2.8 billion, including assumed debt. As a result of this merger, Pinnacle added eight properties to its portfolio.

In this series, you’ll learn how SGMS strengthened its position in the casino industry with the acquisition of Bally. You’ll learn about the impact of the merger on the share prices of these companies. You’ll also find out why the merger was attractive to Bally’s board, and why the merger is considered fair for its minority shareholders.