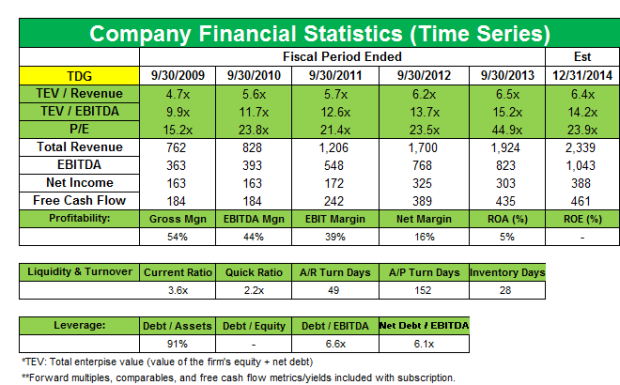 TransDigm is a leading global designer, producer, and supplier of highly engineered aircraft components for use in nearly all commercial and military aircraft in service. The company estimates that about 90% of its net sales for fiscal year 2013 were generated by proprietary products. Most of its products generate significant aftermarket revenue. Approximately 53% of TransDigm’s net sales in fiscal year 2013 were generated from aftermarket sales, the vast majority of which come from the commercial and military aftermarkets. These aftermarket revenues have historically produced a higher gross margin and been stabler than sales to original equipment manufacturers, or OEMs, according to TransDigm in its annual filing.

TransDigm earnings for 1Q 2014 beat Street estimates. Net sales for the quarter rose 23.0% to $529.3 million from $430.4 million in the comparable quarter a year ago. Organic net sales grew approximately 9.1%. TransDigm said the favorable contribution from the acquisitions of Aerosonic, Arkwin, and Whippany Actuation last year accounted for the balance of the increase in net sales.

Net income for the quarter rose 16.1%, to $86.1 million, or $1.44 per share, compared to $74.2 million, or $0.66 per share, in the comparable quarter a year ago. The company said it experienced revenue growth in all aerospace markets, and it sees continuing signs of an improving commercial aftermarket, as commercial aftermarket sales rose both sequentially and versus the prior year.

Morgan Stanley analysts said in a note last month on TransDigm’s results, “Given that pro-forma commercial OEM, commercial aftermarket and defense growth assumptions remain unchanged despite management’s optimistic qualitative outlook on both commercial and defense aftermarket, we believe there is further upward revision potential even without ‘surprise’ M&A.”