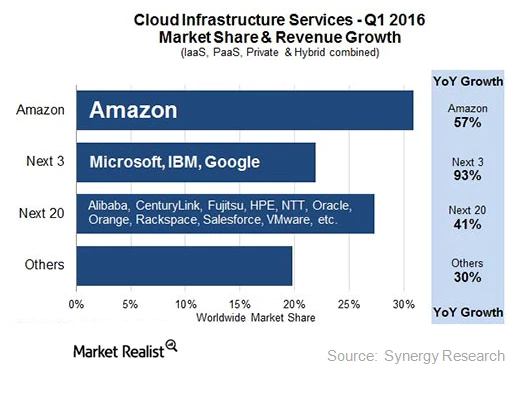 Virtustream Storage Cloud helps large enterprises to secure, manage, and store critical data in the cloud. According to Virtustream, this solution provides a hyper-scale storage platform with enterprise-class resiliency and performance.

Founded in 2009, Virtustream is an enterprise cloud computing company that focuses on mission-critical applications like SAP business applications or SAP (SAP) HANA for enterprises. Virtustream offerings are available as both on-premise and cloud IaaS (infrastructure-as-a-service) deployments.

Who are the top players in the cloud segment?

Synergy Research’s recent report also stated that IBM continued to be a top performer in the hybrid cloud space in 2015.

Synergy Research’s recent estimates show that 1Q16 cloud infrastructure revenues surpassed the $7 billion figure in 1Q16. The cloud is a highly concentrated and competitive space dominated by Amazon (AMZN), Microsoft (MSFT), IBM, and Google (GOOG) (GOOGL). Collectively, they command more than half of the cloud space, as the chart above shows.

In the next part of this series, we’ll discuss how Dell can enter the converged infrastructure market with the help of EMC.