Previously, we looked at how General Motors uses its financial services arm to boost sales in its key markets.

Now, let’s look at the global market share of the company against its competition. This comparison reflects the ability of a company to maintain its position in the global auto market. We’ll also analyze how it may impact GM’s business going forward. 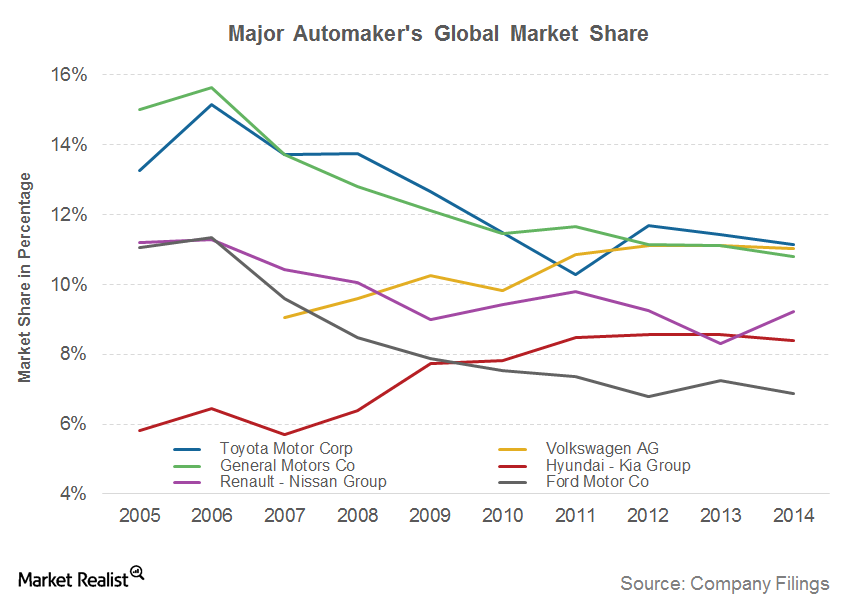 In 2015, General Motors managed to remain at the top in the US auto market, with the largest market share of 16.8%. With this market share, the company is securely ahead of its closest competition, Ford Motor Company (F), in North America. Ford reported a market share of 14.2% for the same period.

This fall was registered primarily due the recent change in the company’s business model in Russia, lower sales in Brazil, and pre-planned reduction in fleet sales in the United States.

In 2013, GM also announced that it would withdraw its Chevrolet brand from the European market, deciding to focus only on popular brands in the region such as Opel and Vauxhall. In the last two years, this has taken a toll on its global market share.

Currently, auto industry (XLY) giants such as Toyota Motor (TM) and Volkswagen (VLKAY) are ahead of GM in terms of global market share.

If we analyze General Motors’ falling global market share closely, we’ll see that the company has taken steps to increase its profitability at the cost of market share. Its cutting US fleet sales and withdrawing the Chevrolet brand from Europe, as mentioned above, are good examples of such steps.

In the next article, we’ll take a look at General Motors’ margins to better understand its profitability.