On February 10, 2016, Twitter (TWTR) is set to release its 4Q15 earnings results. In 3Q15, the company beat analysts’ estimates despite investors driving the price down by 10.2% in after-hours trading. That could be because the company’s guidance was falling behind analysts’ expectations and the domestic MAU (monthly active users) was flat.

In 3Q15, the social media company reported adjusted EPS (earnings per share) of $0.10 on revenues of $569 million, which increased by 58% year-over-year. Similarly, diluted EPS on a non-GAAP (generally accepted accounting principles) basis came in at $0.10. Twitter had beaten analysts’ estimates for EPS and revenues. Analysts’ estimates for EPS and revenues were $0.05 and $559 million, respectively. 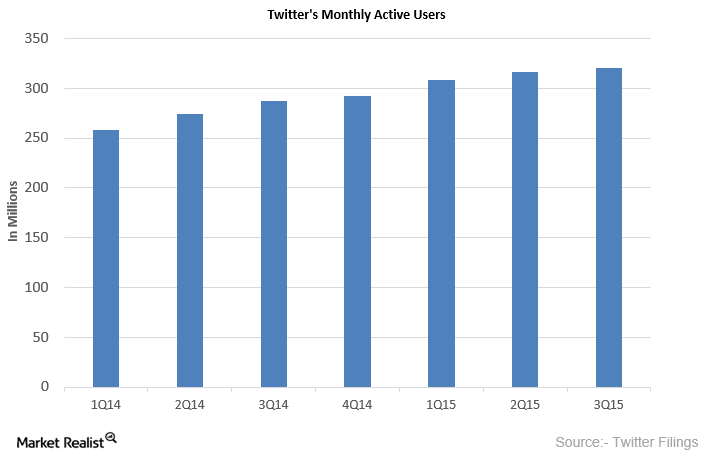 According to Twitter’s guidance, the company expects its revenues to be $695–$710 million for 4Q15. However, guidance fell below what analysts had estimated at $740 million.

Twitter (TWTR) reported average MAUs of 320 million for 3Q15. In comparison, MAUs for 2Q15 were 316 million. That’s a meager gain of 4 million from the previous quarter. The consensus analyst estimate for MAUs was 324 million in 3Q15.

Twitter’s active users haven’t seen much growth in the United States, where the number of active users remains flat at 66 million. International MAUs stood at 254 million compared to 224 million in 3Q14, an increase of 13.4%.