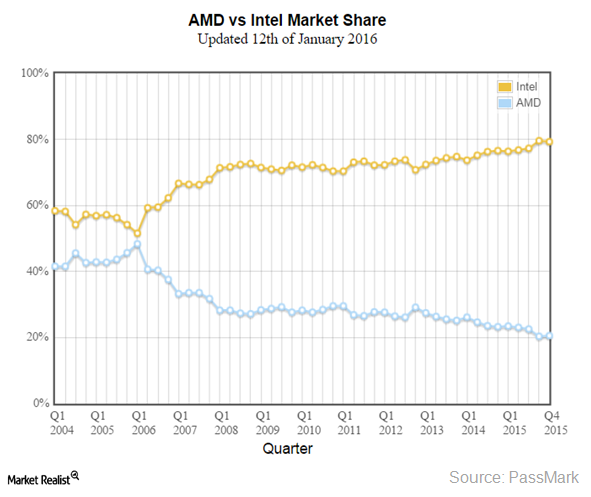 AMD was the first to build x86 64-bit architecture in 2003. It also was the first to introduce new technologies such as the x86 dual-core processor, a 1GHz clock speed, and the APU (application processing unit). It also moved ahead of Intel in 2006 with a gross margin of 58.5%.

However, the tables turned as Intel developed its own x86 64-bit architecture and used manufacturing innovations to gain market share.

Intel has been using its dominant position and greater financial resources to keep the competition from AMD in check. Whenever AMD starts gaining market share, Intel implements marketing and pricing strategies that lead to a lower average selling price, which affects AMD’s margins.

This turn of events concerned Intel, which introduced the Bay Trail-M and Bay Trail-D processors at competitive prices in 2014, gaining market share. Although Intel reported a 14% rise in low-cost processor revenue, AMD’s revenue in this segment declined in 2014. Many OEMs (original equipment manufacturers) use AMD to get a better deal from Intel.

Subdued by strong competition from Intel, AMD exited the silicon manufacturing business in 2009 by selling its fabrication facilities (or fabs) to GlobalFoundries. Leveraging its strength of research and development, the firm adopted a fabless model similar to Qualcomm’s (QCOM) and Nvidia’s (NVDA) approaches. In a fabless model, the company designs and markets semiconductors while the manufacturing is outsourced to third-party foundries. AMD outsources manufacturing to Samsung (SSNLF) and GlobalFoundries.

AMD is looking to reduce its exposure in the microprocessors for PCs and notebooks, where Intel rules the market. The PowerShares QQQ ETF (QQQ) has more than 8.0% exposure in the semiconductor market, with a 3.19% holding in INTC, 0.34% in NVDA, and 1.46% in QCOM.