Mylan NV (MYL) has adopted M&A (mergers and acquisitions) as a core strategy to diversify across products and enter new geographies. 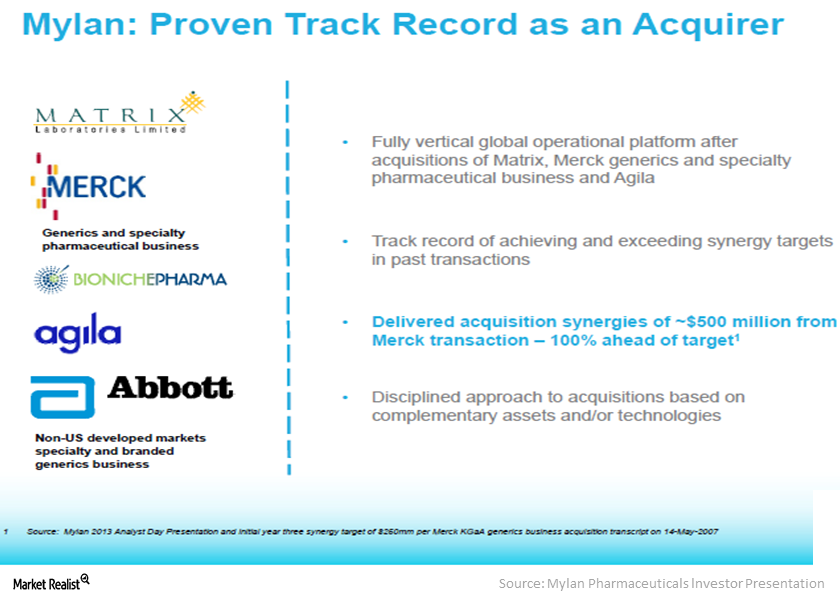 On February 25, 1993, Mylan acquired Bertek Pharmaceuticals, US-based transdermal drug manufacturer, for a consideration of about $39 million. In 1996, Mylan purchased UDL Laboratories for approximately $47.5 million. By acquiring UDL Laboratories, Mylan entered the unit dose and the long-term care market. In 1998, Mylan also purchased Penederm in an effort to strengthen its dermatological division.

Mylan became a global generic leader by acquiring Merck’s generic business in 2007. Due to this vertical as well as horizontal integration, the company entered key global markets such as Australia, France, Japan, Portugal, Spain, and the United Kingdom.

In the year 2011, Mylan entered into a collaboration with Pfizer (PFE) in an effort to develop and commercialize the latter’s generic version of GlaxoSmithKline’s (GSK) respiratory drugs, Advair Diskus and Seretide Diskus, which are used for the treatment of asthma. Mayoclinic.org defines asthma as a “condition in which your airways narrow and swell and produce extra mucus,” which can “make breathing difficult and trigger coughing, wheezing, and shortness of breath.”

According to American Academy of Allergy Asthma and Immunology, in the US, one in every 12 people suffer from asthma. Novartis (NVS) also develops a generic version of asthma drugs and inhalers and hence poses tough competition to Mylan’s generic respiratory portfolio.