At the end of fiscal 2014, which for the company ended December 31, 2014, Mead Johnson Nutrition (MJN) had a total debt of $1.5 billion. Almost all of the company’s debt is a long-term debt. 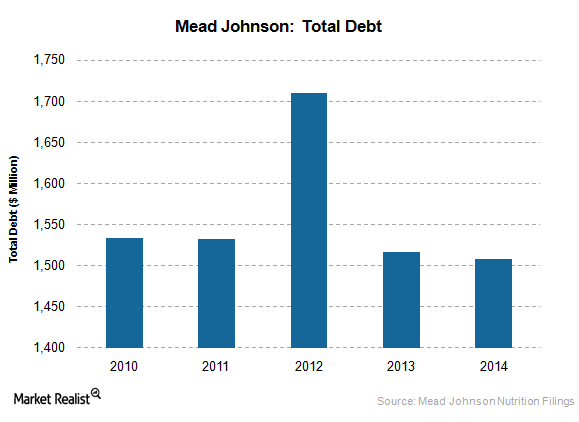 In fiscal 2014, Mead Johnson had a total debt-to-equity ratio of 232%. In comparison, its biggest peers in the infant and children nutrition industry (XLP)—Nestlé SA (NSRGY), Kraft Heinz Company (KHC), and Abbott Laboratories (ABT)—had ratios of 29.5%, 37.6%, and 36.3%, respectively, over the same period.

The credit facility contains financial covenants, whereby the ratio of total debt-to-EBITDA (earnings before interest, taxes, depreciation, and amortization) cannot exceed 3.5 to 1.0, and the ratio of EBITDA-to-interest expense cannot be less than 3.0 to 1.0. The company was in compliance with these covenants as of December 31, 2014, with a total debt-to-EBITDA ratio of 1.4x and an EBITDA-to-interest expense ratio of 15.5x.

At the end of 3Q15, which ended for Mead Johnson on September 30, 2015, the firm was officially an investment-grade company.

At the end of fiscal 2014, Mead Johnson reported FCF (free cash flows) of $606 million. Nestlé and Abbott had FCF of $10.8 billion and $2.6 billion, respectively, over the same period. At the same time, the company had a debt-to-EBITDA ratio of 1.4x at the end of fiscal 2014, whereas Nestlé and Abbott had ratios of 1.5x and 1.9x, respectively, over the same period.

Continue to the next part to find out what Mead Johnson has been doing over the years for its shareholders.