Over the past 37 years, Micron Technology (MU) has expanded its product portfolio from 64-kilobit DRAM (dynamic random access memory) chips in 1980 to NAND Flash Memory devices in 2004, to SSDs (solid state drives) in 2007, and to NOR Flash Memory chips in 2011. The company’s memory products are used in personal computers, servers, wearable devices, mobile devices, and other electronic products.

In 3Q14, Micron reorganized its business segments into four units according to customers, markets, and products: 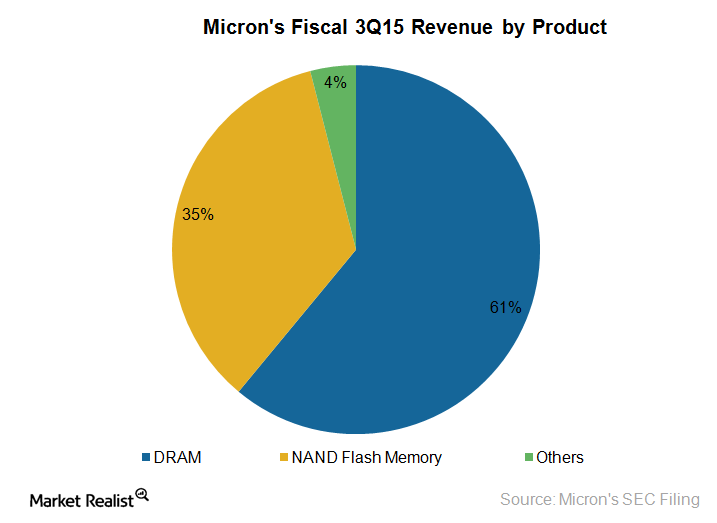 DRAM is a volatile random access memory device located inside a computer, server, or networking equipment that provides high-speed data storage and retrieval. Micron’s DRAM portfolio consists of the following:

The company recently introduced Hybrid Memory Cube, a RAM interface that enhances performance and reduces power consumption of DRAM stacked in TSV (through-silicon vias). TSV is a vertical electrical connection that passes completely through a silicon wafer or die and improves performance through its higher density, reducing power consumption.

NAND flash is a non-volatile memory that can retain data even when power is cut off. It’s slower and cheaper than DRAM. Both are used in mobile devices, computer, networking, SSDs (solid-state drives), automotive, and industrial applications. The company sells digital devices and other flash-based storage devices such as flash memory cards through its Lexar brand.

Micron produces NAND Flash Memory in partnership with Intel Corporation (INTC). According to IHS, it’s the third-largest NAND Flash manufacturer in the world, with an 18.9% market share as of 2014, after Samsung, at 36.5%, and Toshiba (TOSBF), at 31.8%.

The PowerShares QQQ Trust, Series 1 (QQQ) has 0.34% exposure in Micron Technology. Read the next part of this series for a rundown of Micron’s business strategies.