According to the Wine Institute, the per capita consumption of wine in France was 44.2 in 2012 compared to 10.4 in the United States. The United States is the fourth largest wine-producing country in the world. The top three are France, Italy, and Spain. 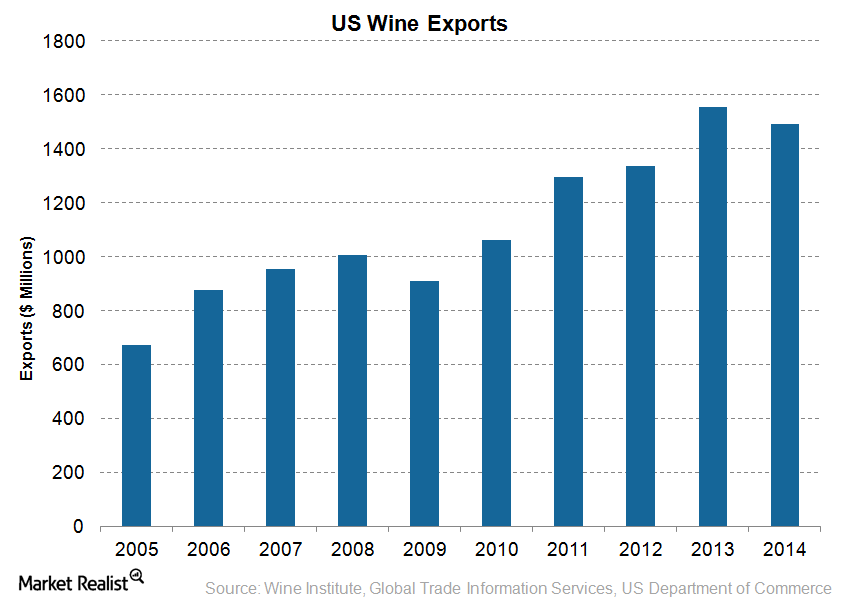 According to the Wine Institute, US wine exports declined by 3.9% to $1.49 billion in 2014 in terms of value. However, export volumes increased by 1.6% to 442.7 million liters. A strong dollar and the West Coast Port slowdown adversely impacted exports.

The European Union accounted for 34.6% or $517 million of US exports in 2014. Apart from Europe, the top five countries to which the United States exported wine included Canada, Japan, China, and Hong Kong. US wine exports to Canada increased by 7.33% in terms of value to $486.9 million, mainly due to strong growth in the Quebec and Alberta provinces.

According to the International Wine and Spirit Research (or IWSR), the global consumption of still and sparkling wines increased by 2.7% between 2009 and 2013 to reach 2.65 billion 9-liter cases.

A recently conducted trade show by Vinexpo estimates global consumption of wine to grow by 3.7% by 2018, to 2.73 billion 9-liter cases, driven by higher demand for sparkling and rose wines. The global consumption of still wine is expected to touch 2.51 billion cases in 2018, a 3.5% rise compared to 2013.