Capital One’s (COF) history is shorter than other banks. It was formed in 1994. This was when Signet Financial Corp. spun off its credit card business into a separate subsidiary named Capital One. The new company was led by Richard Fairbank.

Capital One was a monoline credit card company in the early 1990s. A company is called “monoline” when nearly all of the revenue comes from a single product. Capital One built a strong credit card business. This strategy paid off during good times. However, in bad times it can lead to sharp losses.

Banks such as Wells Fargo (WFC), U.S. Bank (USB), and PNC Bank (PNC) are well diversified banks. These banks de-risk their revenue streams by being in different business lines. All of these banks are a part of the Financial Select Sector SPDR (XLF). 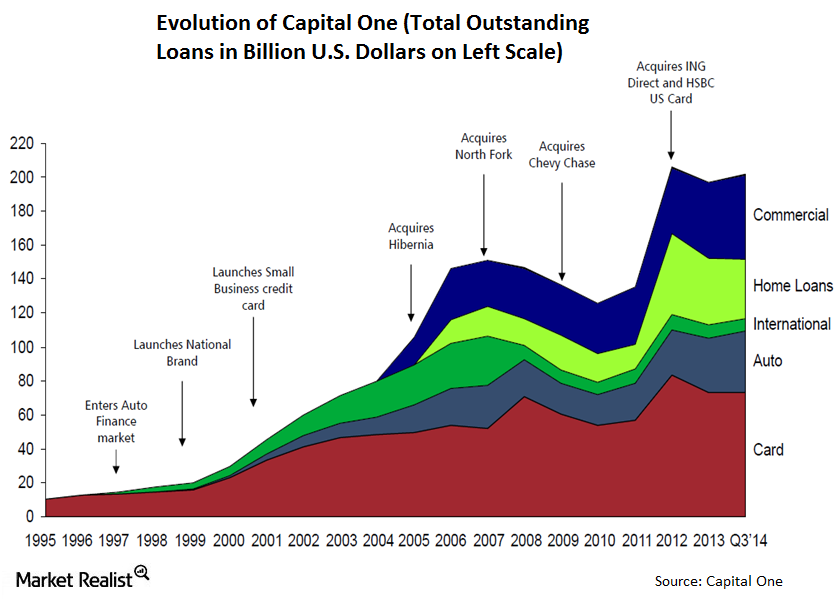 Capital One diversified into retail banking in in the late 1990s and early 2000s. It aimed to reduce the risk from a monoline business. It also helped the bank enter into attractive businesses that it understood. Capital One was one of the pioneers in using data analytics to build a customer profile for its credit card business. It used its knowledge and customer database insights to enter into auto financing.

In last of its big acquisitions, it acquired ING Direct to boost its online banking. ING Direct was a pioneer in online banking in the US. Acquisitions aligned to business strategy helped in diversification. It took the bank to where it is today.