The story behind the Atmel acquisition

In the preceding part of the series, we discussed how Atmel (ATML) posted declining revenues throughout 2015 as the overall semiconductor industry witnessed a slowdown. The slowing financial performance of the company, the attractive product portfolio for IoT (Internet of things) sector, and the growing potential of IoT attracted buyers toward Atmel.

But now let’s attempt to understand the acquisition story in greater detail, as well as its potential impact on Atmel shareholders. 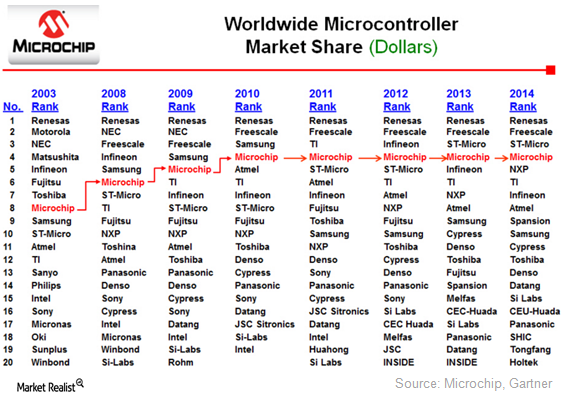 By January 2016, Dialog’s shares plunged by 40%, reducing the merger value below $4 billion. Under the revised scenario, Atmel found Microchip’s bid to be superior because the cash component was higher and because Dialog refused to up its bid. On January 19, 2016, Atmel accepted Microchip’s offer and paid a $137.3 million termination fee to Dialog. The Atmel-Microchip merger transaction is expected to be completed in 2Q16.

Excluding the $155 million excess cash reserve of Atmel, Microchip has to pay about $3.4 billion for the acquisition. The latter will fund the equity portion by issuing 13 million shares and the cash portion by raising debt. (For more on Microchip’s debt position after the acquisition of Atmel, click here.)

The merger would put Microchip in third place in the MCU (microcontroller) market, after NXP Semiconductors (NXPI) and Renesas. The overlap in MCU and automotive applications and the expansion of Microchip’s portfolio are expected to result in cost and revenue synergies of $170 million in fiscal 2019.

Additionally, the combined company’s product portfolio and manufacturing facilities would give stiffer competition to Intel (INTC) in the IoT space. Microchip makes MCUs on MIPS (microprocessor without interlocked pipeline stages) platform. The merger would give Microchip access to Atmel’s ARM-based MCUs, enabling the former to compete with STMicroelectronics, Texas Instruments, Toshiba, Nuvoton, and Fujitsu Semiconductor.

Continue to the next part for a closer look at the different business segments of Atmel and Microchip.