Marketers are shifting from the traditional way of advertising to highly-targeted online videos that identify consumers’ interests and buying behaviors in order to convert them into potential buyers.

Facebook (FB) is capturing a portion of TV ad budgets by rolling out new video features such as Autoplay Video, Suggested Videos, and Photo Slideshow Ad—alternatives to video advertisement. Facebook has made rapid strides in the video ad market. According to the company, more than 8 billion video views occur on its platform from more than 500 million people daily. 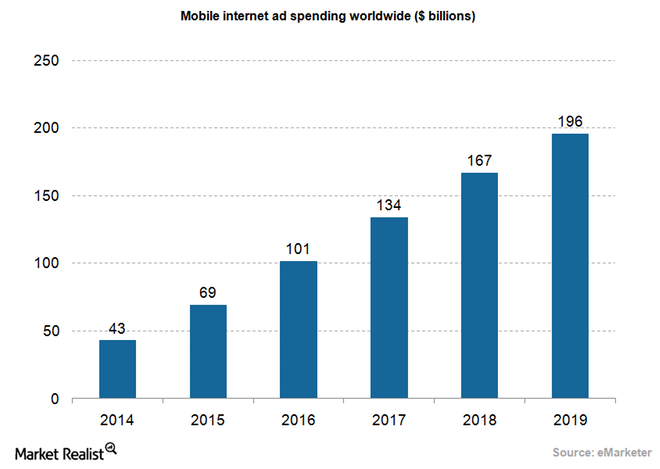 Social media advertising creates a more favorable impact than TV advertising. According to a study conducted by Facebook and market research company Neuro-Insight, people who watch ads on television are more likely to convert into potential buyers after viewing ads on social media sites.

Facebook brings uniformity by allowing advertisers to compare and buy online ads over TV ads by extending TRP (target rating points) metrics. As the chart above shows, ad spending on mobile devices continues to increase, but growth has slowed over the period.

According to Jefferies, the online video market in the United States could reach $17 billion in 2017. Facebook and Google (GOOG) have positioned themselves to capture a large portion of advertisement spending worldwide. Facebook is highly leveraging its photo and video sharing app Instagram while strengthening its partnerships with advertising agencies.