In the previous part of the series, we saw that the Dell-EMC (EMC) merger will create the world’s largest technology company serving the enterprise sector. We’ll now look at the synergies the merger will bring to both companies as well as to VMware (VMW). 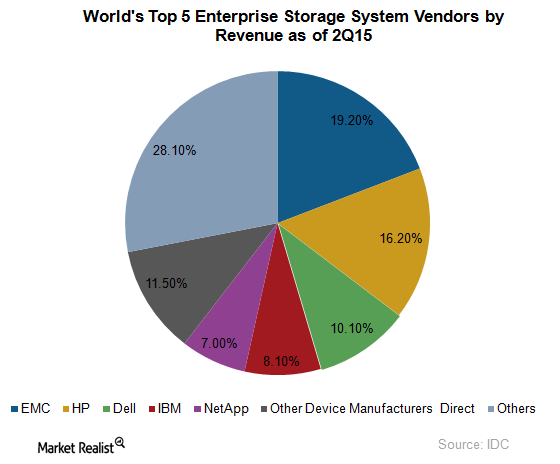 Dell specializes in serving small and midsized customers and EMC in serving enterprise customers. The combined company will have a broader menu of services to offer and a greater customer reach, which will generate significant cash flows. Moreover, making the combined company private will give Dell the flexibility to leverage the strengths of the two companies.

In the Dell conference call on October 12, 2015, founder, chairman, and chief executive officer Michael Dell stated that the combined company’s revenue synergies will be three times greater than its cost synergies. The revenue synergies are likely to be the result of EMC’s converged infrastructure making use of Dell servers and networking products.

Dell’s solutions and go-to-market channels will drive growth across all of the VMware businesses.

The merger deal saves the day

The deal comes as relief to both Dell and EMC, who have been hit by changing industry trends.

Dell has been trying to revive its business, which has been plagued by the slowdown in PC (personal computer) shipments. The PC market slowdown forced IBM (IBM) to sell its PC business and HP (HPQ) to split its computer and printer businesses. Founder Michael Dell made Dell private in 2013 in order to reduce the company’s dependence on PCs and expand into fast-growing markets such as hybrid cloud, converged infrastructure, and software-defined data centers.

In the next part of the series, we’ll see how the deal will prove beneficial for EMC.

If you are bullish about VMware, you can invest in the SPDR Morgan Stanley Technology ETF (MTK), which has 2.3% exposure in the company’s stock.