Out of the total investments, Apollo Investment deployed $55 million in first liens, $51 million in second liens, and the remainder in unsecured debt and structured products. The trend reflected increased deployment toward less risky investments. 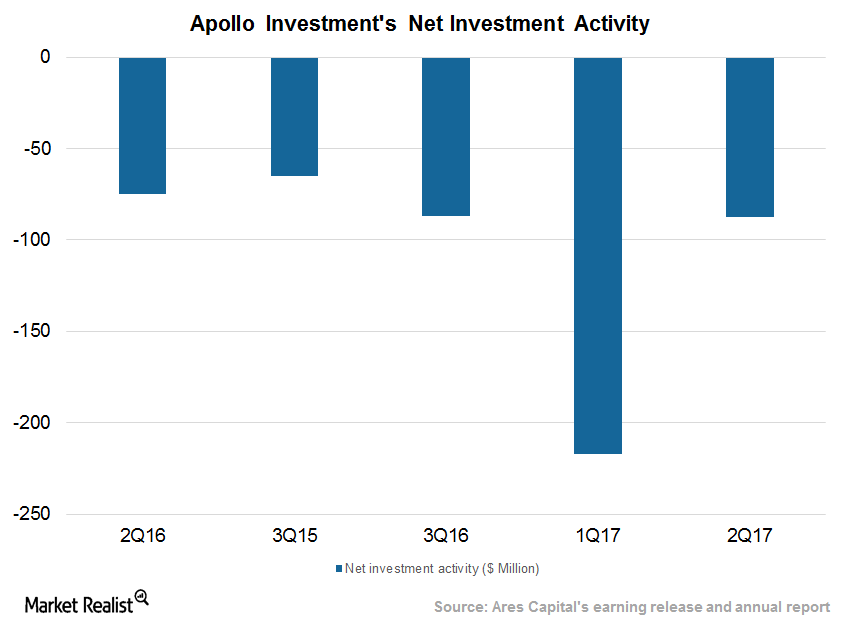 The yields on its first lien purchases stood at 10.5% compared to 10.0% in second liens. Both remained higher than in fiscal 2Q16. The trends reflect higher competition in purchases of quality debt offerings.

Below are some of the company’s peers in the investment management industry and their assets under management:

Together, these companies form 5.2% of the PowerShares Global Listed Private Equity ETF (PSP).

Exits at a faster pace

In fiscal 2Q17, Apollo Investments (AINV) sold $17.9 million in investments and repaid $197.1 million. Sequentially, the pace of exits declined, reflecting a potential reversal in its investment trend. The company is repositioning its portfolio in a bid to have a lower risk profile and lower volatility.

Apollo Investments is deploying funds into traditional corporate loans, mainly a floating rate directly sourced from the Apollo platform, and it has added product offerings via mid-caps. Apollo Investment expects its investments to revive and turn positive in 2017 as exits from weaker investments could stabilize or decline in the upcoming quarters.