Facebook’s (FB) Oculus Rift can stream games from Microsoft’s (MSFT) Xbox One. And users will be able to stream Xbox One on any Windows 10 device. Microsoft stated that Windows 10 users can stream games from their Xbox One to a PC (personal computer). According to Xbox news, from June 15, 2015, “Xbox One preview program members who are also in the Windows Insider Program can use the streaming feature to mirror their Xbox One user interface to Windows 10 PCs and tablets.” And while all Windows 10 users can stream Xbox One games to their PCs, Oculus Rift owners can play these games with the Oculus headset as well. 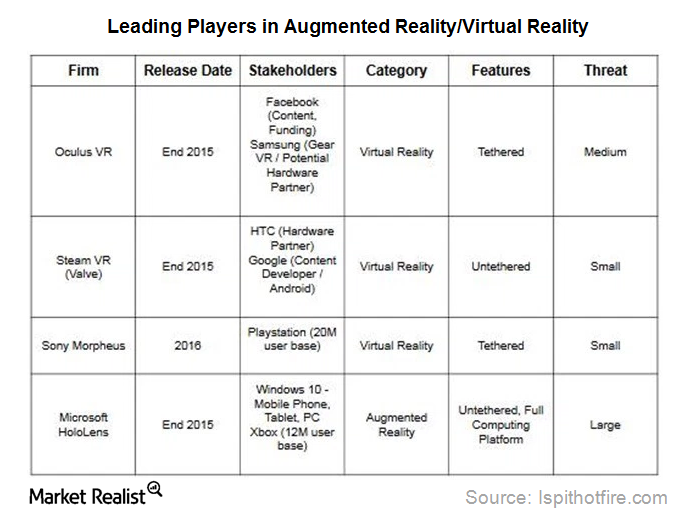 By partnering with Facebook, Microsoft is relying on Oculus VR to team up against its competitor Sony, which plans to launch its Morpheus VR (virtual reality) gaming headset in 1Q 2016. Microsoft and Sony are leading players in the gaming console space, too.

As well, Microsoft is trying to gauge the virtual reality space through its association with Oculus Rift without having to develop its own software platform. For its part, Oculus VR gets access to a list of games that, though not optimized for VR, is growing at a rapid pace. It also gives users a wider choice of games to play apart from the specialized games being planned for launch.

Having said that, Microsoft also has HoloLens, which is an untethered augmented reality headset that brings 3D images to the world. It’s slated for release along with the launch of Windows 10, as the above chart shows. By partnering with Oculus VR, Microsoft also aims to push its Windows 10 platform.

If you’re bullish about Microsoft stock, you could invest in the Technology Select Sector SPDR Fund (XLK), which invests ~9.61% of its holdings in Microsoft.