Amazon (AMZN) has been experimenting with its grocery business, AmazonFresh, for a long time now. It has been slowly expanding AmazonFresh and adding locations where it is available. Northern Virginia, Maryland, Dallas, and Chicago are among the most recent additions.

Amazon has also been experimenting with AmazonFresh pricing strategies. In the last quarter, it reduced the price for AmazonFresh to $14.99 per month for Prime members. 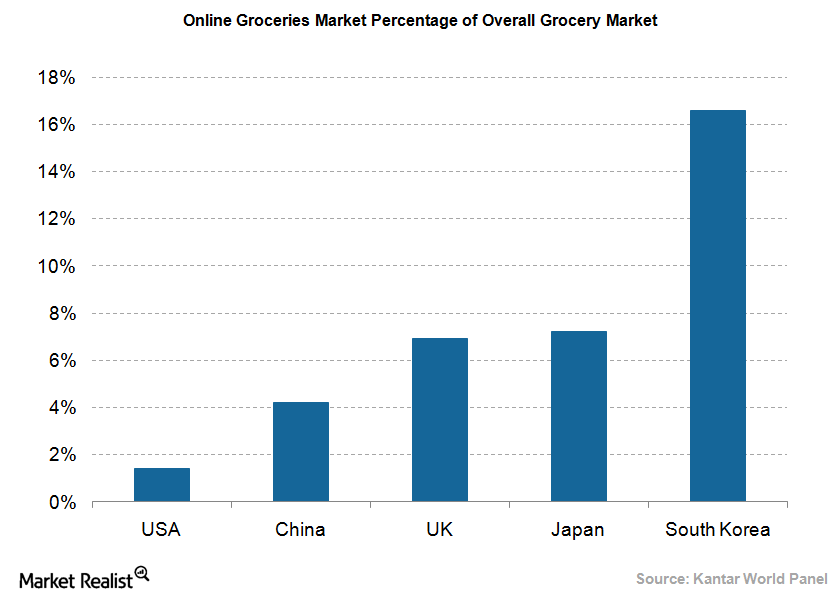 Amazon trying to break the dominance of physical retailers

A Wall Street Journal report from December 5, 2016, said that Amazon could open as many as 2,000 physical grocery stores. However, this report was refuted by Amazon, which stated that it doesn’t have any plans to open anywhere near that number of stores.

However, it’s clear that Amazon does consider physical grocery stores as key to gaining share in the large grocery market—people still prefer to shop for groceries in person so that they can select the freshest items. The online grocery market accounts for only 1.4% of the overall US grocery market, according to a Kantar Worldpanel report. Currently, this market is dominated by retail giants such as Walmart (WMT), Target (TGT), Whole Foods Market (WFM), and Kroger (KR). Comparatively, online grocery stores account for 4.2% of the market in China, 6.9% in the United Kingdom, and 16.6% in South Korea, as the chart above shows.