As India moved to replacing its higher-denomination notes, the impact was far felt. The country’s tax authority is making a list of dealers that they believe could be involved in suspicious activity. The ban on gold imports after the demonetization has put many dealers in danger.

Axis Bank, India’s third-biggest private sector lender and the top gold importer during the past week, is familiar with the consequences of money laundering. Several jewelers’ and gold dealers’ deposit accounts were frozen, and activities were suspended. 19 employees were involved in “black money” laundering after the demonetization deadline. The bank has suspended the accounts of some precious metal dealers and jewelers after two executives were arrested for money laundering.

Although the added insecurity in the market could lead to gold purchases, investors fear that the government’s anti-money laundering steps could target gold and impose further restrictions. 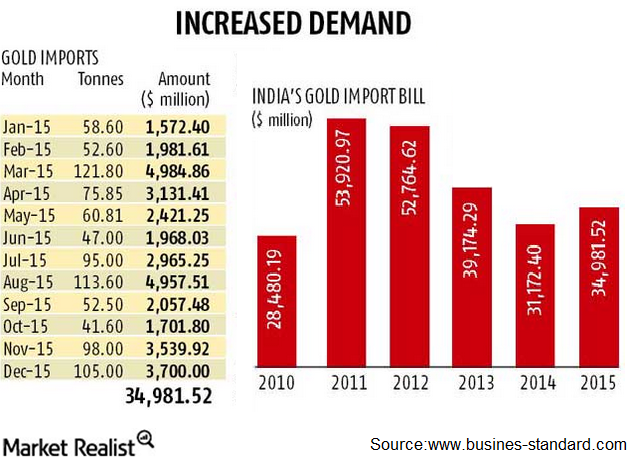 The gold market is likely experiencing a drought. Money has stopped flowing to favourite funds such as the SPDR Gold Shares ETF (GLD) and the iShares Silver Trust ETF (SLV). These two funds saw significant outflows.

The demonetization in India also impacted gold, as there were higher premiums paid for gold in exchange for the banned currency notes. Premiums as high as 50% on ten grams of gold were witnessed during the start of demonetization in India. Although the country’s demand and import figures had a minimal immediate impact on the market, a longer-term impact may be felt. Mining shares affected by gold prices include Sibanye Gold (SBGL), Gold Fields (GFI), Primero Mining (PPP), and Newmont Mining (NEM).