After a strong fiscal 2Q16, Tyson Foods (TSN) updated and raised its guidance for 2016. We discussed the sales and earnings guidance in Part 3 and Part 4. Now, let’s consider what the company expects for its segments. 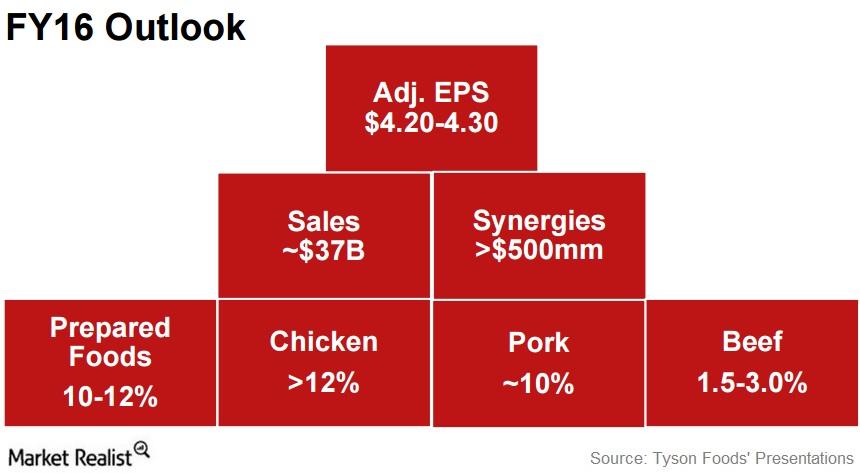 The company expects its Prepared Foods segment to benefit the most. Lower raw material costs of ~$200 million are estimated in fiscal 2016. The operating margin for this segment is supposed to be near the low end of its normalized range of 10%–12% for the full year. Continued investment in brand strengthening, innovation, and new product launches is expected to benefit margins. The profit improvement plan for this segment is projected to help Tyson realize synergies in the future.

For the Chicken segment, lower feed costs of ~$200 million are estimated in fiscal 2016. This estimate is based on futures prices compared to feed costs in fiscal 2015. An operating margin of more than 12% is also projected from this segment.

For the Pork segment, the company thinks that industry hog supplies will increase by 2% in fiscal 2016 compared to last year. The operating margin is expected to be ~10%.

For the Beef segment, industry-fed cattle supplies are projected to increase by 1% in fiscal 2016. As a result, the operating margin is estimated to be in its normalized range of 1.5%–3.0%.

The Other segment includes Tyson Foods’ foreign operations associated with raising and processing chickens in China and India. It also includes third-party merger and integration costs. The company expects this segment’s operating loss to be ~$85 million in fiscal 2016.

Tyson Foods’ peers in the industry include Cal-Maine Foods (CALM), Flowers Foods (FLO), and Pilgrim’s Pride (PPC). They reported year-to-date returns of -8.8%, -17.4%, and 17%, respectively, as of August 2. The PowerShares Dynamic Food & Beverage Portfolio (PBJ) invests 2.5% of its holdings in Pilgrim’s Pride.