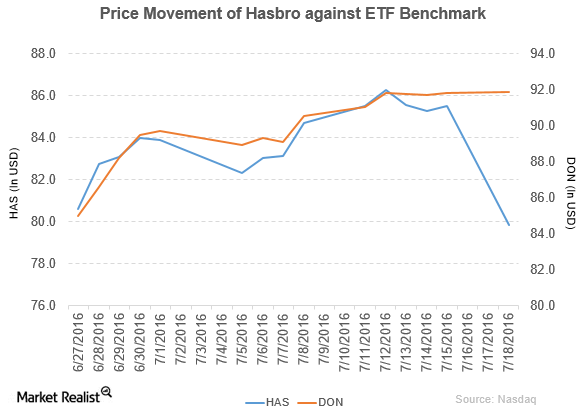 The WisdomTree Mid-Cap Dividend ETF (DON) invests 0.65% of its holdings in Hasbro. The ETF tracks a dividend-weighted index of midcap stocks. The YTD price movement of DON was 15.3% on July 18.

The market caps of Hasbro’s competitors are as follows:

Performance of Hasbro in fiscal 2Q16

During fiscal 2Q16, the company repurchased 270,611 shares of its common stock worth $21.9 million at an average price of $81 per share. There are still $421.5 million available under the current share repurchase authorization.

Hasbro has declared a quarterly cash dividend of $0.51 per share on its common stock. The dividend will be paid on August 15, 2016, to shareholders of record at the close of business on August 1, 2016.