XtremIO, EMC’s all-flash array, expanded its market lead in 2015, with bookings and revenue reaching over $1 billion for the year. XtremIO’s 4Q15 revenue was higher than its cumulative revenue in the previous four quarters. 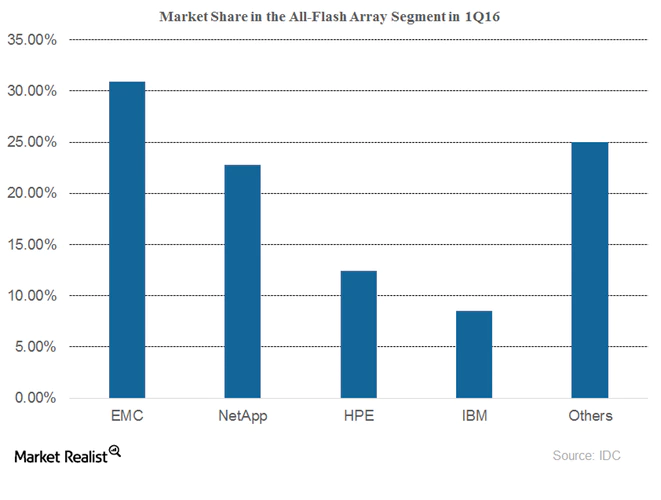 According to EMC, 15 of the top 20 Banking and Finance companies on the Forbes Global 2000 Top Companies List purchased flash solutions from EMC in 2015. EMC’s revenue from telecommunications, media, and entertainment companies also rose by 316% YoY in 2015.

According to the International Data Corporation’s Worldwide Quarterly Enterprise Storage Systems data, EMC continued to dominate the all-flash market with revenue of $245.6 million and a share of 30.9% in 1Q16. NetApp’s all-flash array segment’s revenue was $181.1 million with a share of 22.8% in 1Q16.

Other major players in this segment include technology (QQQ) giants Hewlett-Packard Enterprise (HPE) and IBM (IBM), which have shares of 12.4% and 8.5%, respectively. The top five players account for over 80% of the total revenue of the all-flash array market.