The North America region witnessed a similar revenue decline (53%–55% fall) for both companies from 1Q15 to 1Q16. But SLB’s Latin America region was the most resilient (22%) fall during the same period. In WFT’s Middle East, North Africa, and Asia-Pacific region, the revenue fall was relatively moderate (32%) during that period. 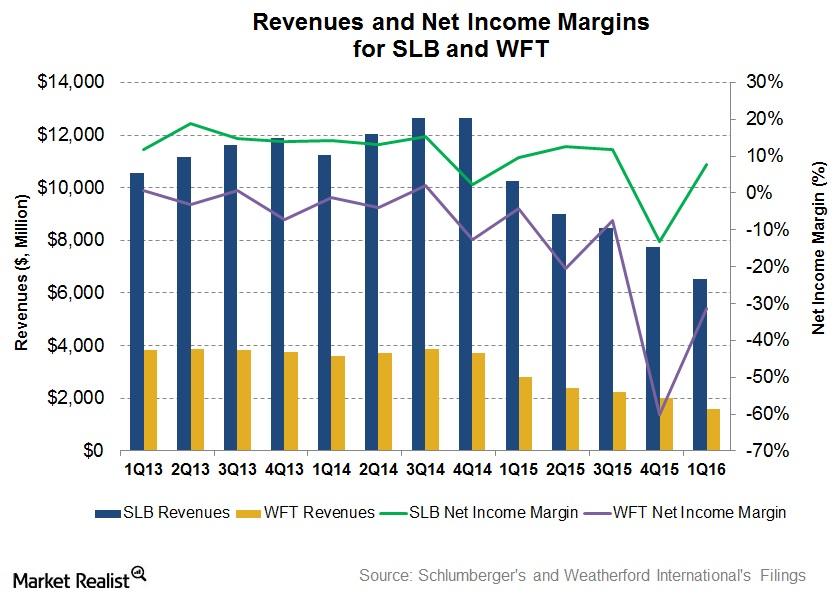 By comparison, Schlumberger recorded an operating loss in 1Q16, but the fall was much more slight ($10 million). Overall, SLB’s net income margin was 8% in 1Q16, as compared to the 31% net loss margin for WFT in 1Q16.

Year-over-year, WFT’s 1Q16 net loss deteriorated mostly due to $193 million (pre-tax) in litigation charges, severance and facility closures, supply-contract-related charges, and asset write-downs. There were no such charges for SLB in 1Q16.

Notably, Schlumberger makes up 1.2% of the iShares S&P 500 Value ETF (IVE). For investors looking for exposure to the energy sector, energy makes up 12.9% of IVE.

Value drivers for SLB and WFT

North American operations for both the companies were affected by falling rig count and upstream companies’ drilling and exploration budget cuts. This created lower demand and pricing pressure for oilfield service companies’ products and services, eroding these companies’ revenues and margins. Apart from that, these companies faced different value drivers in the other parts of their geographic operations.

The major factors affecting Schlumberger’s revenue and income include:

The value drivers for Weatherford International’s international operations include: