In the previous part of this series, we learned about AT&T’s (T) OTT (over-the-top service) that is expected to be launched in 4Q16. During the Jefferies Technology, Media, and Telecom Conference held on May 12, 2016, Scott Mair, AT&T’s senior vice president of technology planning and engineering, talked about how AT&T’s wireless network capacity may be able to meet its future needs. 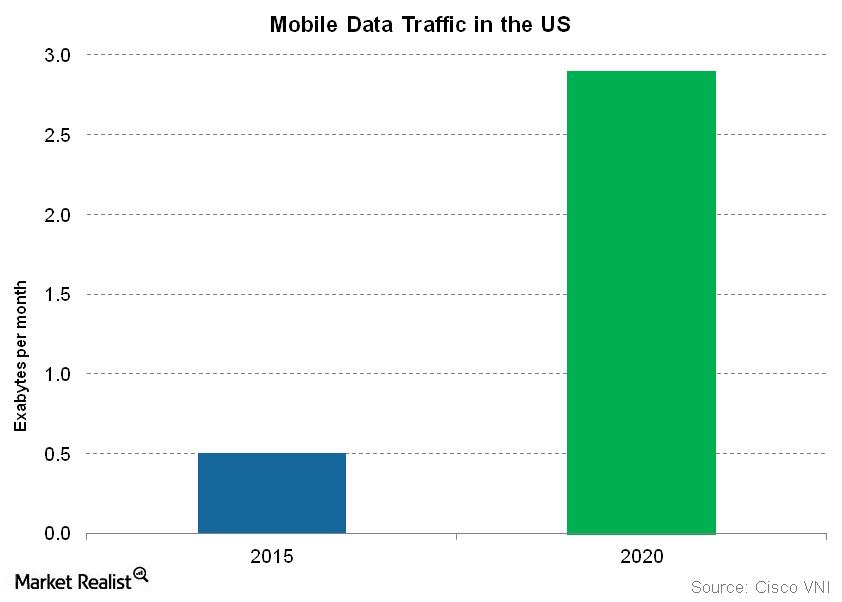 Mair noted, “The good news about being an integrated company now is we actually know what that forecast looks like and had been assuming some level of traffic. And we’re well prepared to handle that traffic not just in the short-term, but in the long-term, and then are very comfortable with what we’re seeing.”

He added, “Between the AWS-3 and WCS spectrum and 40 megahertz of that, we’re repurposing spectrum from 3G even today. So we’re repurposing 3G. We’ve announced the 2G shutdown at the end of the year. So again that’s going to free up more spectrum for us to use in the network.”

Anticipated growth in US wireless data traffic in the medium term

The top four US mobile companies are Verizon (VZ), AT&T, T-Mobile (TMUS), and Sprint (S). In the medium term, the expectation for growth in mobile data traffic—a key growth driver for these companies—remains solid. As you can see in the above chart and according to Cisco’s (CSCO) VNI forecasts, this traffic should grow at an average annual rate of ~42% from 2015–2020.

For diversified exposure to AT&T, you may consider investing in the iShares MSCI USA Minimum Volatility ETF (USMV). The telecom company made up ~1.7% of USMV at the end of April 2016. The ETF held ~4% in telecom players including AT&T, Verizon (VZ), and SBA Communications (SBAC) on the same date.